and now it looks like i may have burn it.

i spent a boatload of money at nordstrom this weekend.

yeah, kinda like that, but white. and without the gun.

i don't have near enough occasions to wear this stuff, mind you. i may start a trend at the dog-walk park. the gym on the weekend. the neighbors' house for dinner.

i'll be overdressed, but still. i'll look good.
Posted by spaceneedl at 9:25 PM No comments:

actor portrayal; not the actual author.

today i went for my first run as a 44 year old. the results were decidedly mixed.

on the one hand, i trudged like a clydesdale. on the other, i did over four miles in 34 minutes, on a hilly course. and i didn't get hurt.

along the way i asked myself why i continue to run, to work out, to play basketball. the first thing that popped into my head was, "so i can run with my son one day, when he's getting in shape for his sports."

that's partly true. but i also like feeling as though i could run from something dangerous if it were chasing me: a land shark, or a republican, or an angry toddler.

of course i'm also running from death, and damned if satchel paige wasn't right: every time i look over my shoulder, the grim reaper is gaining on me. relentless bastard. doesn't matter. i'm going to delay the inevitable as long as possible. when it arrives, i intend to insult it with rude comments about its wardrobe and personal grooming habits.

by the time my son (and then my daughter) is old enough to run a couple miles, i'll be at least 50. damn, fifty. it seems ancient...it's hard to imagine i could ever be so old. but being 44, and one day 50, beats the alternative.

hey, death, you need a flea bath. and that cloak looks ridiculous. something in pink plaid would be an upgrade, jaggazz.

see? death may be on his way, but he'll get no satisfaction from me.
Posted by spaceneedl at 2:57 PM No comments:

"shut up! shut up! we will not listen to any more of this! shut up, or i'm leaving!"

despite the burly, manly demeanor of his photo, he's actually a dainty, fussy, mama's boy, prone to taking his microphone and going home. hard to believe, isn't it?

After repeated criticism of the Bush administration, the Republican chairman of the House Judiciary Committee yesterday gaveled a hearing to a close and walked out while Democrats continued to testify -- but with their microphones shut off.

C-SPAN2 continued televising the proceedings for six minutes after Sensenbrenner had departed, with lettering on the screen explaining the strange circumstances.

big jimmy, it seems, won't hear any criticism of the bush administration, nor brook any questioning of the "patriot act", no matter how relevant it may be. in this case, a hearing on the renewal of that act provided the relevance.

during the hearing, several republicans testified to the brilliance and necessity of curtailing the civil rights of americans. but when democrats attempted to provide couterpoint, sensenbrenner had a meltdown...

He urged witnesses to "wrap it up" and repeatedly told committee members that their time for questioning had expired.

"No, I will not yield," replied Sensenbrenner, 61, the heir to a paper fortune who is known for a brusque insistence on decorum. He completed his reproof of the witnesses and left the Rayburn House Office Building hearing room amid a cacophony of protests from Democrats seeking to be recognized.

as noted by rep. debbie wasserman schultz (d-fla), the minority was allowed to call zero outside witnesses during the hearing.

decorum, it appears, is reserved for republicans in our government.
Posted by spaceneedl at 8:53 PM No comments:

as long as they don't ask any troublesome questions or write about anything but home ec.

that's probably why he doesn't call on women at press conferences. either that or he's a sexist, egotistical, lying, hypocritical bigot.

as an evangelical, he no doubt believes it's the man's role to be the head of the family, and the woman's role to be its heart. it's a woman reporter's role, therefore, to sit down and shut up while the president calls on another guy.

like biffo or goomba or hammy. one of the guys he's given goofy nicknames to. meanwhile, maureen dowd can't get a white house press pass. 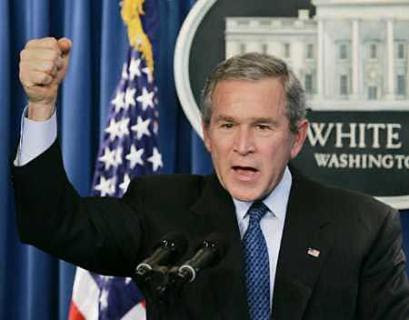 bush demonstrates how he milks bulls in crawford, texas.

the real reason bush doesn't engage the female members of the media? he's afraid of his wife. first time he gets all cute and smarmy with one of them filly reporters, laura bush turns george into a gelding.

not that anyone would notice the difference.
Posted by spaceneedl at 7:40 PM No comments: