u.s. citizens crossing the border to canada? no problem!

u.s. citizens crossing the border to the united states? not so fast!

"are you bringing back any food?"
"just some packaged food we brought with us into canada."
"why were you in canada?"
"uh, to run a trail race."
"what are the last four digits of your social security number?"
"uh..." (hesitates, silently reciting the entire number) "2376."*
{interminable silence}
"please proceed to the secondary inspection lane."

defining our terms:
"If the U.S. Customs and Border Protection (CBP) officer at the port of entry cannot verify your information, or if you do not have all of the required documentation, a CBP officer may direct you to an interview area known as “secondary inspection.” Secondary inspection allows inspectors to conduct additional research in order to verify information without causing delays for other arriving passengers."

my passport is in good standing, and i've gone through the process to obtain a global entry clearance. which means for the low, low price of $100, the u.s. government agrees not to consider me a threat to national security. in return, they get my fingerprints, all my personal data, and a satellite fix on my whereabouts at all times. so...good value!

the cost, according to the marketing copy on the web site, is darn well worth it!


"Your time is valuable. As a pre-screened Global Entry member, you arrive in the United States, check-in at the Global Entry kiosk and you're on your way. So what are you waiting for?"

note to self and anyone reading: never trust the marketing copy.

the CBP officer behind the "secondary inspection" counter was terse, unsmiling, and seemingly annoyed at his computer. he didn't let any of that get in the way of his questions, though. oh, yes, he had questions...

"have you ever self-identified as african-american?"
"do you have tattoos on your chest?"
"have you ever lived in independence, missouri?"
"were you born in scotland?"
i had a weird flashback to jack nicholson on the stand in "a few good men."
"are these really the questions you brought me here to answer, lieutenant kaffee?"

"have you visited europe recently?"
"have you ever traveled under a different name?"
"do you have a nexus pass?"

full disclosure: the answer in each case was a straight-faced no. "no, sir," actually. as absurd as the questions were, and as readily as incredulous, smartass answers leaped into my head, i didn't want to spend one moment longer than necessary in "secondary inspection" at the us-canada border.

after 15 minutes of this doltish third-degree, the interrogation lights suddenly dimmed, and we were allowed to continue on our way.

i assume that's when officer inquisition suddenly stumbled across the marketing copy on the global entry web site, and realized the gravity of the mistake he had just made.
***********
semi-serious epilogue: my wife and i are over-privileged white people. if we are "secondary inspected," it's an inconvenience and just a matter of time before we get to go on our merry way home.

imagine, for a moment, how a similar experience might go for people with fewer resources. people who don't speak english easily. people who are afraid of unhinged american authority.

in a similar vein, does anyone believe this kind of vacuous evaluation is keeping anybody safe? 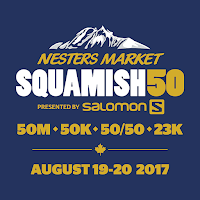 and though i may not have any right to be, i'm disappointed.

as noted previously, i felt only ready-ish for squamish. but as the race unfolded, i was convinced i was going to get it done. i was strong on the climbs, nimble on the steep, rocky downhills, and running the in-betweens.

i was feeling so good, at mile 23 i literally danced to the soundtrack playing at the corners aid station. fine times in the squamish sunshine.


my watch failed at around mile 31, which was weird since it carried me all the way through a much longer day at miwok. right about the same time i got stung by a bee. i'm pretty sure those events were connected somehow...but the bee is dead, and he's not talking. either way, not long after they occurred, other things began to go sideways.

i pulled into the mile-33 quest university aid station for a change of socks, shoes, shirt, and hat. i was also handed an otter pop by a very cute aid station volunteer who couldn't have been more than 3 years old. both put a smile on my face as i headed out to do some more climbing on a very climb-y day.

that's when the wheels very unexpectedly came off. i went from moving along well to "what the hell is happening?" within a couple-mile stretch.

as it has on more than one occasion, my stomach, which had been threatening trouble for several miles, turned upside down during that brief time. i was wishing it would also turn inside-out, but had no luck inducing it.

kind and concerned folks stopped on their way by to say, "are you okay?"
"i'm all right...i'd be doing better if i could puke."

yeah, i wasn't doing all right.

my friend ian burton, who i ran with for many miles this day, caught up and did the best he could to coax me along.

"there's plenty of time. you can still hang out for a bit at the next aid station and get back on top of things."

it seemed a reasonable enough thought, but if i'm honest, i didn't think it was going to happen. whatever was going on with me was getting a good grip on my body. and though i'd been taking tums (and later pepto) to ward it off, eventually they just seemed to make things worse.

we made our way to the garibaldi aid station, and i plopped into a chair. note: this is always a bad idea for a runner with any intention of continuing on.

i sat eating ice chips, trying to get something, anything, down. ian patiently restocked and refueled but eventually, reluctantly headed back to the trail. it was the last i would see of him until the next day.

(the good news: ian finished in fine style on a course where any finish is a serious accomplishment.)

meanwhile, for me it was just a matter of time. as the minutes 'til cutoff ticked away, i sat in disbelief that i would drop just 10 miles from a squamish finish. but i had no more in the tank. shivering, foggy headed, legs cramping, i asked for a ride down the hill.
***********
i could not be more grateful to the volunteers throughout the course, but especially at garibaldi. they were terrifically kind and attentive during my time in their company. i wish i could've reciprocated.

i'm also thankful for my friends daisy clark and dianna christopoulos, who saw me shivering on a park bench at the finish and covered me with blankets, coats, and caring. you guys are the best, and i love you both.
***********
ed. note: standing here today, i feel remarkably good. my legs are not particularly trashed, and i feel like i could go out for a recovery run right now...except that my stomach is still kinda wrecked. doctor appointment tomorrow.

song(s) stuck in my head the entire day: "some days you gotta dance" ~ dixie chicks; "sussudio" ~ phil collins
Posted by spaceneedl at 4:37 PM No comments:

last night i enjoyed my first run in many, many weeks where i felt strong and happy to be running, rather than wishing i were having a nap.

convenient timing, this, as the squamish 50-mile is two days away.

pursuant to a previous post, i'm not ready to run squamish. but i am very happy to be ready-ish. the course is described as "...exceptionally difficult, made tougher still by the technical nature of a majority of the terrain. Throw in the fact that the back half runs much more difficult than the front half and you have yourself a nice little day of suffering."

caveat: "Thankfully we’ve made every effort to distract you with incredible scenery at every possible turn."

"There are bears and even cougars in the wilderness around Squamish, and we have seen both on our course over the years. We see bears each and every year at some point during the weekend. In our first year we had a bear cross the course with less than a kilometer to go, right in downtown Squamish. We cannot say enough how rare it would be to encounter a cougar and how regularly bears are seen in and around Squamish."

oh. okay, then. time to dust off the chainmaille running attire, i guess.

it's fortuitous that the cut-offs for this race seem very generous: 17 hours, 45 minutes to get it done. key word in that sentence: seem. it's also possible i'll need every last one of those minutes. especially if i'm obliged to spend valuable time evading or fending off top-of-the-food-chain predators.

it's trail running. no one said it was gonna be easy.

time to set aside the qualms, pack up the kit, and go see what's what.

Posted by spaceneedl at 11:09 AM No comments: