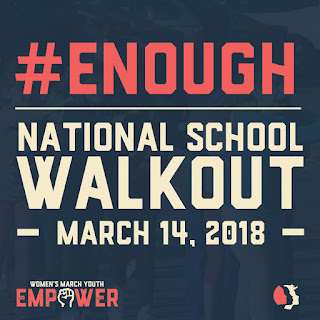 that's how many american children have died by gun violence since sandy hook.

it's equivalent to wiping out everyone at our daughter's high school four times over.

i thought about that today as i watched hundreds of her fellow students walk out of school, gathering to honor kids killed in US schools, and demanding change in gun laws.

before the walkout got underway, i ambled about taking photos of the school sign, the principal setting up a loudspeaker, other parents congregating on the sidewalk...and i noticed a young woman standing alone, unmoving. as i neared her i saw her eyes were red and full of tears. in that moment i went from "interested observer" to "father trying not to sob in public."

i kept walking past, not wanting to intrude on her grief ~ and to get a handle on my own, percolating closer to the surface than i realized.

within minutes the southwest corner of the school grounds was filled with students carrying signs, chanting, cheering. cars going through the busy intersection honked and waved, while police cruisers sat silently at a discreet distance.

as student leaders took their turns on the PA, a man wearing an earpiece looked on from just a few feet away. he was inconspicuous, motionless except for his eyes, which sharply scanned the crowd. behind him and to his right, washington governor jay inslee waited for his time at the microphone.

perhaps it's because of our deteriorating political climate, or the immediate reason for the gathering itself...but it occurred to me that there are people out there ~ extreme in their distress or in their beliefs ~ who might take a shot (or 50) at an assemblage like this.

i thought about the 17 kids killed at marjory stoneman douglas high school, and tried to imagine 17 kids in this crowd disappearing randomly and forever. in that moment it was hard to breathe.

there was a time when i would've felt paranoid for thinking such a thing.

that time, of course, is over.
Posted by spaceneedl at 9:59 AM No comments:

but when i do, i like it to be on a snow-slick sluice heading steeply into trees on either side of a single-track trail.

i like it to be on legs wearied from miles of running in a furrow just wide enough to place both feet side-by-side.

on one calf held together with a compression sleeve and one knee freshly driven into hardpack in a predictable yet somehow hilariously surprising fall.

it was cheerfully difficult and wildly beautiful and occasionally painful and completely exhilarating... everything trail running (like life itself) aspires to be.

the course was made up of three distinct sections ~ the climb, the snow, and the descent ~ each with its own wicked charm.

part one: the climb.

a week and a half before this race i suffered a rude left calf strain. which is to say it just showed up one day, unannounced, and stayed for several more, undeterred by my yawns and other obvious hints that it was time for it to leave.

despite diligent rehab efforts, two days before the race there was still plenty of doubt whether the calf was healed enough to hold up for 22.4 trail miles.

i decided to go find out, because compartmentalization is real and so is a steadfast belief that good things can randomly happen to people who make dumb decisions. besides, chuckanut was in a couple weeks and i was way behind on training miles. let's run this thing!

where was i? oh, the climb! and the advisability of scaling steep terrain on a potentially unreliable calf.

in fact, the farther we got into the course, the better it felt. who knew the cure for a running injury was more running??
***********
part two: the snow.

disclaimer: i've run in snow before, many times...but never this far in this much snow.

disclosure: it was really hard and amazingly fun. kind of like running barefoot on the beach. if, you know, the beach were cold, forested, and covered in frozen precip.

the carpitla (snow glazed with ice) started on the trip up the woody trail, just past the upper falls. literally every step was an opportunity to slip and stumble back down the hill ~ like a winter version of the princess bride.

at the top, the course spilled onto the upper grade logging road, which on this day was less a road and more a sunny, snowy slot car track. the path ~ narrow, uneven and fraught with ankle-peril ~ led to to a very welcome and welcoming aid station at wallace lake.

further on, jay lake appeared, signaling the turnaround toward the greg ball trail and a rendezvous with the glissade.
***********
part three: the descent.

it was all going so well.

every step was an adventure in slush and the laws of physics, but i was winning!

right up to the point where i hit the hard-packed snow like a beginner in his first snowboard lesson. whack!

i stayed down for a few moments, on my back, head below feet, telling myself i was okay. "luckily i landed in some snow," i said to no one in particular.

"here we go," i went on, just ahead of a failed attempt to recover.

"here we go!" i said again, and this time time it actually worked. onto hands and knees, then back onto feet.

gravity was working in my favor as i shambled down the hill, more momentum than intention. simultaneously, i began a self-diagnostic on the parts that hurt.


narrator: it was fine.
***********
denouement: wallace falls is a great place to run. brian nelson and the folks at wander bigger running did an excellent job putting together this inaugural race benefitting snohomish county volunteer search and rescue.

the park is only an hour or so from seattle, which means i'll be running here again as often as possible.

when that will be is very TBD because, surprise! two days post-race i re-injured my calf during an easy, innocuous recovery run.