Had it gone according to plan, last weekend would've been pretty fun.

Unfortunately the plan went off the rails pretty early.
*** 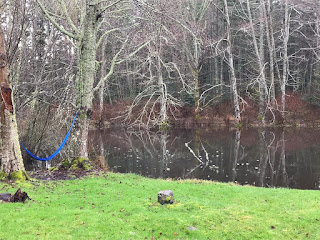 Backstory: Every January since 2014 we've headed to Orcas Island, WA, for the Orcas 25k.

We rent a house with friends, share some good food and wine Friday evening, race on Saturday, and return home Sunday.

And while the order of those events is always similar, it's the dissimilarities that make the weekend something to look forward to every year.

This year's Friday was unique in that it included a distraught voicemail from my dad, who said he'd gotten a phone call from our son. Son had called from a Seattle jail, said my dad, and needed $3,000 for bail. He recounted a lot more detail, but to sum up: the call was a scam. Our son was not in Seattle, nor in jail, nor in need of $3,000.

Nevertheless, my octogenarian dad was very upset, which in turn upset me.

Thankfully, the ferry ride from Anacortes to Orcas is reliably beautiful and calming and centering. By the time we reached Orcas, I felt back to equilibrium. That lasted about three hours, which is when the texts started coming in.

Long story short, the next-door neighbors' dog dug under the fence between our back yards and proceeded to slaughter three of our chickens.

The carnage was discovered by a friend (and her two children) who were looking after the flock for the weekend.

For what seemed like hours (it wasn't) we received status updates on which hens were gone, which were still alive, and steps being taken to secure them for the night.

At that point, if I'm honest, my impulse was to go home. It felt like we could've averted the situation had we been there (possibly) and that we should be there to prevent new bad things from happening (absurd).

We stayed. But I'd be lying if I said I felt good about it.
***
There was work to be done when we got home Sunday afternoon. There was a burial to attend to, fraught conversations to be had with our neighbors, and two stressed and wary hens to becalm.

There was also the matter of reconciling our own emotions—work that still waits, dispassionately, in the background.
***
Chickens are social creatures, thriving as part of a complex group of three or more individuals. We're now down to two: Scarlett and Matilda.

To remedy this, my wife has already ordered 8 more (very young, very tiny) chicks to be delivered to our door late next week. It'll be many weeks more before they're ready to join the big girls.

Ahead of their arrival, we spent hours out back digging a trench along the fence separating our yard from our neighbors'. We attached heavy wire mesh to the fence and buried the bottom a foot underground. It was hard work, but it should help deter future attacks.
***
We're not angry at our neighbors, or their dog (Presley). He's a rescue, and has been endlessly patient with our three dogs whenever we've met on walks.

What's strange is that Presley and the hens have been out back together—albeit on opposite sides of the fence—countless times over the past year and a half. He never showed a even hint of aggression toward them.

Posted by spaceneedl at 5:14 PM No comments:

I'm going to be a terrible farmer.

I mean, I'm prepared to get up early and feed the goats and clean the coops and harvest the honey and fix the fences and irrigate the plants and solve the problems and smile at the farmers markets and go to bed early and start over again the next day.

But I'm not prepared for our animals to die.

I know this because here on our little urban farm we've lost several chickens to various causes, and I've cried over each and every one of them. Because they had names and personalities and a place in our hearts and I'm powerless not to mourn when they go.
***
Backstory: my wife and I are planning a move to the Big Island. We're going to buy several acres and raise goats and honey bees and chickens and whatever else makes sense as we get a handle on the craziness.

We're planning to build a hale'a (barn) to host farm-to-table events, with views to the water and sunsets and the Maui coast. It's going to be idyllic and backbreaking and nonstop and it will undoubtedly make us wonder what the hell we were thinking and how we could be so stupid.

Which is all fine, because we're willing to learn the answers to those questions and others we aren't yet smart enough to formulate.

But standing here today I know without reservation we're not ready for the hard stuff.
***
We lost Agnes last night, to a virus known as Marek's disease. It's one of the most common diseases in small flocks, and there's no treatment for it once a bird is symptomatic.

Agnes was my favorite, and I told her so before she went. She was the smallest of our first three chicks, but she grew up to have the biggest personality. She would follow us around the yard, carrying on a happy conversation, scratching for bugs, investigating the daily nuances of her realm.

She had a look in her eye, and her demeanor, that bespoke intelligence, and I fully expected to be discussing the issues of the day with her for a long time.
***
It's possible that we'll gradually get used to losing animals, that we'll feel this pain less often, less deeply. That we'll develop, I don't know, a professional detachment that insulates us from the loss of these fragile lives we surround ourselves with.

Because while grief can be heavy and lingering, indifference would be far, far worse.
***
There's a mini-forest at the back of our lot, a glade of oak, maple, apple, holly, and evergreen trees. Today, after days of wind, rain, and snow, we got a break. Rays of actual sunshine filtered through the canopy, lighting up the spaces between branches and holly leaves and pine needles.

Agnes is there now, beneath one of the bright spots between two evergreens.

And yeah, I cried again.

Posted by spaceneedl at 3:46 PM No comments: