Once upon a time, huge shopping malls roamed the Earth.

They competed with one another to see which could cover the most land with concrete and steel to claim the title of "world's biggest."

Now, not sadly, those beasts are mostly gone, replaced by digital analogues.

Today, in the pages of another anachronism, this photo caught my attention —>

Back in the day I worked at a restaurant near the Metrocenter Mall in Phoenix, AZ.
It was a raucous little establishment most nights, attracting customers looking for other attractive customers, inexpensive food, and maybe a drink or three.
During the NBA season, visiting teams would come in after their games with the Phoenix Suns. I met a lot of players that year—Reggie Theus, Larry Micheaux, Adrian Dantley, Danny Schayes, Otis Thorpe, Rick Robey—which seemed kind of cool at the time.
More importantly, I met a girl there who would eventually agree to marry me. That, of course, was super cool.
Back to our allegory:
Eventually and relentlessly, the retail environment evolved. Lumbering anchor stores like Sears and JC Penney were overrun by more nimble competitors. Omnivorous predators like Walmart, Costco, and Amazon devoured local traffic, and then came the asteroid strike known as COVID-19.
After 47 years, Metrocenter, much like this allegory, expired in 2020.
The End.
***

Lex: What are you and Ellie gonna do now if you don't have to pick up dinosaur bones anymore?

Posted by spaceneedl at 3:30 PM No comments:

Winter Weather Advisory for Big Island Summits
Wintry mix of freezing rain with periods of snow.
Additional snow accumulations of up to two inches.
When we signed up for life on an island in the middle of the Pacific it didn't occur to us we'd need to bring snow shovels.
Imagine our surprise.
Turns out the highest points on the Big Island routinely get snow, because that's what happens to rain at 13,000 feet.
"The highest summits on the Big Island — Mauna Kea (13,803’) and Mauna Loa (13,678’) — receive snow on a yearly basis. From November through April, the average nightly temperature on the summit of Mauna Kea drops below 28 degrees, and a record low of 12 degrees was recorded in January of 2014. These high altitude temperatures, combined with heavy precipitation from winter storms, can lead to fierce blizzard conditions and exceptionally heavy snowfall."
Blizzards! On the Big Island! Have I ever told you I hate being cold? I really do. As much as I once loved a good snow day, I would now rather have a move somebody else's furniture day. Or a muck out the chicken coops day. Or a run an ultra with a bad stomach day.
The good news is, our house is at about 2,000 feet, where average temperatures range from 81 in the afternoon to 61 at night. According to the BestPlaces Comfort Index, "Honoka'a rates an 8.9 (10=best), which means it is more comfortable than most places in Hawaii."
If we get snow there, of all places...well, let's just hope it doesn't come to that. Because climate-change-wise, that will be regrettable.
You know what else happens on the Big Island? Magma.
***
Volcano Watch: Notable Magma Intrusion At Kīlauea Summit
The beginning of a new chapter in Kīlauea Volcano activity
We'll be living in a place where folks found it necessary to establish lava zones—presumably to help people make informed decisions about where to stand in the midst of a volcanic eruption. 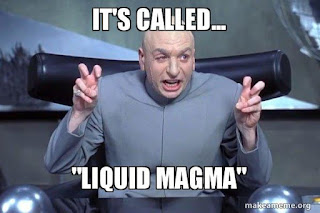 If you find yourself in zone 1, for example, you may want to get yourself elsewhere—soon. If you're in zone 9, on the other hand, you're probably okay—for now.
If that turns out not to be the case—well, we'll all be in deep stuff requiring an entirely different kind of shovel.
"Recently, the USGS Hawaiian Volcano Observatory’s monitoring network recorded another first post-eruption event at Kīlauea’s summit: a magmatic intrusion. This followed an earthquake swarm on November 30, 2020, that was centered in the middle of Kīlauea caldera."
I'm not sure what that means, but it sounds bad. And the phrase "earthquake swarm"? That doesn't seem promising at all. If anyone needs us we'll be down by the water in zone 420.
Speaking of swarms...
***
Little Fire Ants Cause Big Problems
LFAs are not easy to get rid of, so an ounce of prevention is worth a pound of cure
Oh, okay.
"Once little fire ants establish themselves around your house, there will be millions of them. We get many calls from people at their wit’s end as they and their children are getting stung every day. They will also sting pets and other animals. Life for a dog or a cat in a LFA-infested area can be miserable. Repeated stings to a pet’s eyes can lead to blindness."
I'm not saying this information would've changed our minds, had we known before we decided to move to the Big Island. But I'm not *not* saying it, either.
We've raised worrying about our animals to an art form in Seattle. From hawks to off-leash dogs to speeding cars, we've lost much-loved creatures here. The idea they might one day be blinded by biting bugs is...not acceptable.
The state of Hawaii takes a dim view of invasive species as a rule, and LFAs seem to be high on their list of things to eradicate. And while this might've inspired confidence at some point on the timeline, if we've learned anything it's that "nature finds a way," in spite of (or because of) humanity's best efforts.
***
Of these three natural phenomena, for me, the smallest one is the most low-key stressful. Because they're like little terminators. They can't be bargained with, can't be reasoned with. "They don't feel pity, or remorse, or fear. And they absolutely will not stop...ever!"*
Who needs that? I'd rather have a snow day than an LFA day, 10 times out of 10.
“If you take care of the small things, the big things take care of themselves.”

Sundance: It's a long way though, isn't it?

Butch: Ah, everything's gotta be perfect with you!

Sundance: I just don't want to get there and find out it stinks! That's all.

Butch: At least think about it.

Sundance: All right...I'll think about it.

(*The original Terminator movie was set in the year 2029, in case you've lost track of that detail. Just saying.)

Posted by spaceneedl at 8:39 AM No comments:

Making It Up As We Go

“Kid, the next time I say, ‘Let's go someplace like Bolivia’, let's *go* someplace like Bolivia.”
—Paul Newman, Butch Cassidy and the Sundance Kid
***
Change is coming.
Lots of change.
[Ed. Note: That's in addition to the incalculable *everything* that will never be the same thanks to Shitshow 2020.]
In no particular order:
Our daughter, who's been living with us since March, is moving out soon. She's transferring to the University of Washington from San Diego State, after realizing there's no point continuing to pay out-of-state tuition for online classes.
The first week of January she'll move into her own on-campus apartment...where she'll still be taking all her classes online. But at least she'll be getting back a measure of independence.
In return, we'll get back a breach in our hearts, heads full of worry, and more quiet than we ever wanted. Because that's what we bargained for, lo these many years ago, when we said, "Have kids? Sure, why not!"
Our son, also endlessly taking virtual classes, has had a similar epiphany. But he'll be *leaving* his apartment in Ellensburg, WA, by the end of December. And since he can take classes literally anywhere there's an internet connection...he's moving to Hawaii.
There, in addition to finishing a degree in Natural Resource Management, he'll be caretaking a little farm on the Big Island.
Our farm.
And by that I mean, "the farm my wife and I are *thisclose* to buying."
We sign the paperwork tomorrow, and close on Wednesday. See the photo up top? That's the one.
At seven acres it's not a big operation—but it is aspirational. It wants to be a place where we can work hard and have some modest success. A place where honeybees thrive, hens never know what a cage is, and rescue animals feel safe and loved.
Pre-COVID we thought we had a pretty good idea what our business model would look like. Honey, eggs, goat milk products, a small event space (with photo-worthy water views), a farm-to-table agritourism experience, and maybe even a little running company.
That plan assumed a healthy economy and people able to travel and gather together without fearing for their lives. Until those things are true again, our business model is, uh, in flux.
Doesn't matter. We're going.
What we don't know is *when* we're going.
For an assortment of reasons, the plan for actually relocating is also in flux. There are logistics to work out, variables to account for, and a deadly virus to evade.
We think it'll take up to a year for us to get from mainland to island, and longer still to transition from urban to agrarian.
But you know what? It's time. Time to start creating a future that's more compatible with life. While we're able.
We feel that with more urgency every day. COVID has a lot to do with it, reminding us that anything can happen to anyone at any time—so if not now, when? What are we waiting for?
In the meantime, there is still much to be done here. Among many other responsibilities, we have three rescue dogs, two rescue cats, a dozen hens, and a bunch of bees to keep us busy.
Will we miss our friends and this community and the emotional structures we've built around them over the course of 17 years? Like crazy. But Hawaii is a nice place to visit—and we hope a free place to stay on the Big Island will convince folks to come have a look around, soak up some vitamin D, and listen to the quiet for a while.
If you've read this far, you're invited.
You'll have to buy the beer, though.
***
And I prayWhen we meet againThat the world has changedInto the world that we are imaging now togetherAnd I pray that the world has becomeThe world that we’re planting inside of ourselvesFor each otherFor our ancestorsAnd for our kids
I don’t know I don’t know
We are making this up as we goWe have to make this up as we go
The Bengsons—Keep Going Song
Posted by spaceneedl at 9:38 AM 4 comments: