~ Charles Dickens, clearly writing about ultra running
***********
Halfway through the race, the Baker Lake 50K was shaping up to be one of my best 50Ks ever.

Until it wasn't.
***********
I'd heard mixed reviews about this event, ranging from faint praise to "Pacific Northwest classic!" [Spoiler alert: it is excellent.]

The trails around Baker Lake are a celebration of PNW terrain—rolling, runnable, occasionally technical, and ferally fun. The views are nonstop—mountain, river, lake, and fall colors laced with cobwebby clouds. 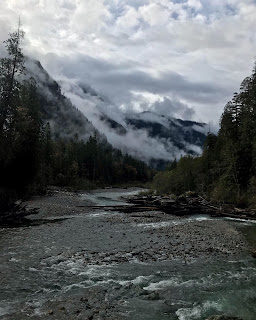 It was the perfect stage for a day of tomfoolery on the trails—running with a good friend, jabbering endlessly about life and work and politics and the future. The first 15+ miles flowed by like, "Hey, feel free to do this all day if you want."

The NEXT 15+ miles quickly and unexpectedly turned petulant, like a two year old up way past his bedtime. My stomach, ingrate that it is, abruptly scorned my efforts to keep it happy. Even the ritual chewing of the S-Caps was met with disdain. This behavior continued through the rest of the race, just because.

In the meantime, I rammed my knee into a fallen tree. This can happen during a trail run, and honestly I didn't mind picking the sharp little tree-shard out of my flesh. But the immediate swelling and stiffness? That was uncalled-for.

I'd be fibbing if I said these little setbacks weren't beclouding my sunny demeanor. By mile 27 I was not having the best of times. On a day that was as near-perfect as October PNW running can be, this was a shame and a travesty. Inexcusable, really. And yet, there I was, shambling about like a bridge troll, just wanting to be done.

Tsk. Pitiful.
***********
Full disclosure: it wasn't all bad. I encouraged other runners who were having struggles of their own. I shared some naproxen with a woman whose hips were giving her fits. I stopped to take photos of some amazing scenery and picked up litter when I saw it. It helped. 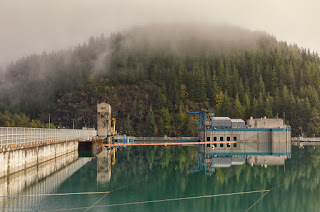 The miles, still stubborn, eventually gave way, and soon I was crossing the Upper Baker Dam, less than a mile from the finish.

And while I had hoped to roll in under six hours, my finish, race-wise, wasn't as disappointing as I convinced myself it would be.
***********
"And yet I have had the weakness, and have still the weakness, to wish you to know with what a sudden mastery you kindled me, heap of ashes that I am, into fire."

Shoes:
Hoka Speedgoat 3
Song stuck in my head part of the time: "We got the beat" ~ The Go-Go's
Posted by spaceneedl at 1:25 PM 2 comments: 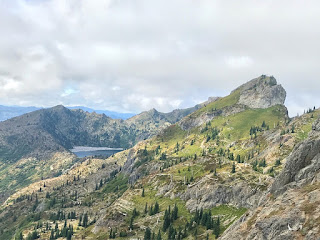 It didn't seem like a seismic event at the time.

But seven years later, I realize how completely and permanently a new running store in our neighborhood changed my life.

Seven Hills Running Shop opened Oct.2, 2012. I was there that day—and then at the shop's first group run, and then on more days than I can count.

Because of this little shop, and the community it's inspired, I'm the beneficiary of more lasting friendships than I could've imagined—and hopefully been a better human in return.

Because of this little shop, I've met and run with and shared beers with some of the most amazing athletes on the planet, people accomplishing extraordinary things on and off the trails. 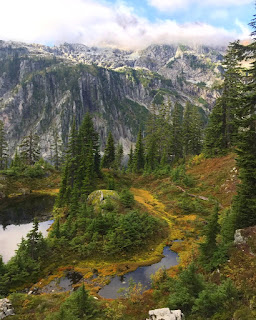 Because of this little shop, I've:

* Run literally thousands of miles
* Run farther in a day than I ever thought possible
* Run in states from Hawaii to Florida (and a few other countries as well)
* Seen, up close, stunning natural beauty I would've experienced only via photographs
All because one day seven years ago I fell in with a bad crowd at a local running shop.

I may never be able to fully pay forward this good fortune.

But I am going to try.

Cheers to many more.

Posted by spaceneedl at 10:36 AM No comments: