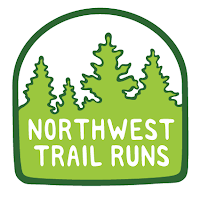 but once in a while i feel fast, and that's almost the same thing.

saturday was one of those days.

in addition to a rare top-10 finish, i had an even rarer negative split in the second half of the race.

i'll take that any day.

song stuck in my head the entire time: "funknroll" ~ prince

weather.com said there was a 100% chance of precipitation before and during the race. they were half-right. it poured while we were standing around waiting for the start. but by race time, the rain was pretty much over. regardless, there was a lot of ponding on the trails. after daintily skipping around the first few puddles (as always), i went through the middle the rest of the way. once your feet are wet, they're wet® after all.

runners were falling down all over the place. wet rocks/roots and non-grippy shoes are a tough combination. the LP 3.0s were having none of that. i never even slipped, let alone fell. if you're looking for a wet/winter shoe, these will treat you well for distances up to (and probably beyond) 50k.

they're also great for non-rainy and technical terrain. i mean, obviously.

oh! there was a bear warning at the trailhead. "bears recently sighted nearby," or words to that effect. if there were, in fact, bears nearby they at least had the good sense not to come out in the rain.

many thanks to the proprietors and volunteers at northwest trail runs. this was a fun track and a fine inaugural event at the paradise valley conservation area. always good to find new places to run!

Posted by spaceneedl at 10:35 AM No comments:

today's smoothie tastes good, but it smells a little earthy...

i'm pretty sure it's the pumpkin giving it the mushroomy, french bordeaux nose. or maybe the peanut butter. or the combination thereof.

regardless, if this concoction doesn't get me past a 10:30 a.m. urge to eat canada, i don't know what will.

1125 hours: i'm not hungry yet. colleagues are breathing a collective sigh of relief.

Posted by spaceneedl at 11:42 AM No comments:

for years my weekday breakfast routine consisted of coffee, fresh fruit, and a protein bar. this combination always got the job done, but recently began to feel, uh, deeply unsatisfying. i needed a change.

this may take some fine-tuning, but if today's smoothie is any indication, i'm well on my way to living forever.

0930 hours: i am famished. why? my smoothie totaled up to almost 20 oz. if i ate/drank all its ingredients individually, i'm pretty sure i'd feel unbearably full. more research required.

1030 hours: am prepared to eat my own arm, or a passing colleague. there must be a combination of ingredients that will compose a healthy and longer-lasting smoothie. this weekend's grocery run may be expensive.

1130 hours: "hangry" is an actual thing. must remember not to conference call when "hangry." even if some colleagues deserve to be beaten with their own dismembered arm(s). after which i will eat said arm(s).

1155 hours: i have a paralyzing headache...it's possible i may have waited too long to eat lunch. also, it's likely too late to steal the lunches in the break room refrigerator, as surely some colleagues will be gathering there. it may be best if i leave the office now.

1230 hours: just spent $31 at one of the local food trucks. the missus will not be pleased.

1240 hours: after eating just one of my lunches i am unbearably full. why?? (and not-for-nothing, what am i going to do with the rest of these lunches??)

1440 hours: still full. so as not to waste them, i will put my additional lunches up for grabs in the lunchroom.

1638 hours: famished. additional lunches are long-gone, swarmed by locusts disguised as colleagues. apparently they thought i was serious when i offered them my extra food. may have to revert to previous plan of eating one of them.
***********
epilogue

i may have passed out from hunger. because suddenly it's time to head for home and dinner, which i will make myself from all the things in the house. as far as i know, no colleagues were cannibalized.
***********
it took two years to drag our smoothie maker from the depths of the pantry into the light of day. loving wife asked why it took me so long to get around to using it.

i'm ready now.
Posted by spaceneedl at 8:39 AM No comments:

"we are here to laugh at the odds and live our lives so well that Death will tremble to take us.”
~ charles bukowski
***********
we're making some changes around here.

it starts in the master bathroom. instead of standing on subflooring and moving-blankets, we're now standing on heated ceramic tile. we figured nearly three years of the former was long enough.

fine print: there's also a new shower, new (old-but-restored) clawfoot tub, and new double vanity. so we can see how tired we look in not one but two mirrors.

new washer and dryer. this washer actually gets stuff clean.

moving on to the living room, we now have built-in cabinetry to store (hide) stuff. also, a big wine rack. i may have buried the lede in the previous sentences. because, wine.

in the kitchen, i recently began using the ninja smoothie maker i received as a christmas gift two years ago. turns out i like smoothies. and there are recipes.

after getting grossed out by the coffee maker purchased three years ago, i've moved on to a french press. it'll get cleaned every day, as opposed to once in three years. also, after some trial and error, the new thing makes good coffee.

other recent and/or proposed changes:
the missus has a new job. now with more travel! yay?

the girl begins her sophomore year of high school today. now with new start-times! instead of a manageable 7:45 a.m. drop-off, it's now 8:45. how this is remotely workable for working parents, i have no idea.

the boy is (allegedly) going to join the navy. we've seen no steps toward this goal thus far, but one thing is certain: he won't be living at home playing video games.

i stopped eating potato chips for a while.

that's about it for now. tune in next week for another episode of "omg, seriously? i want the last sixty seconds of my life back, jerk!"
Posted by spaceneedl at 9:29 AM No comments: