all politics is local

i was picking up some balloons for the girl's birthday party. and some ice cream. and some snapple lemonade. i don't know what he was buying.

i walked up to the checkout as his items were being bagged. he looked up and gave me a little nod. i gave him the nod in return, thinking he looked familiar. i figured it out as he was heading out the door.

reagan hosts an afternoon program on air america radio. he broadcasts nationwide from a seattle studio. he's a liberal, so i like him. his delivery is not always great -- a little halting and uncertain at times -- but his views parallel mine very closely.

so it didn't seem out of place to see him at bartell's. even though it was.

reagan's dad has an aircraft carrier named after him. and an airport. the former president is an icon on the right, even though he was not a particularly good president. the people on the right take what they can get, you have to suppose. which of their presidents has done a good job, after all?

ron jr. lives with the jarring contradictions every day. he manages to keep things together, in spite of it all.

the girl's birthday party was a big success. the build-a-bear workshop may have played a role.
Posted by spaceneedl at 8:16 PM No comments: there's steam rising from our roof this morning.

the sun is heating the frost that set in overnight. it's cold and quiet outside, and looking out the window, from roof to roof to roof, the steam rises everywhere.

coming home from work and school the past few nights, the house has been cold. the furnace is still in unserviced summer mode, so we crank up the gas fireplace to take the chill off. we're fortunate to have that option. i wonder how many homes will stay cold through the coming winter.

the spaceneedl household will be down one adult much of the next few weeks. i leave tuesday on a nine-day business trip. i'm back three nights, then leave for four more.

suddenly it's november. that's when mrs. spaceneedl goes to new orleans, followed by germany. suddenly it's thanksgiving. then december.

the trips are preceeded by weeks of long, trying work days at spaceneedl sprockets. camraderie has been replaced by irritability. friendships have become polite, professional, distant. sometimes not so polite.

sometimes the combination of time and pressure produces a brilliant diamond. sometimes it just produces coal...cold and opaque.

it's turned into a rare gem of a day here. sunny, not a cloud anywhere. mrs. spaceneedl is outside, returning from her walk to the farmer's market. two little dogs roll around in the wet grass out front.

aside from the oft-mentioned sense that time is racing by...things are good for now.

it'd be nice if it stayed that way for awhile.
Posted by spaceneedl at 10:59 AM No comments:

nihilism we can believe in 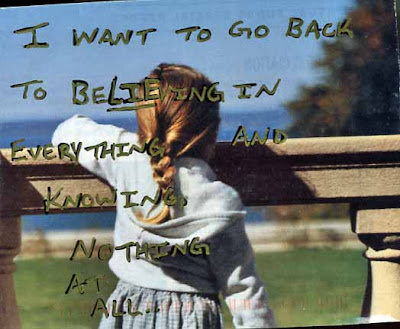 you've heard that a mccain administration would be just a third bush term.

it'd be much worse.

a vote for mccain-palin is a vote for self-immolation. which is fine, if you like barbecue. not so great when you're on the menu.

mccain doesn't just want to continue bush's policies. he wants to supersize them.

apropos nothing, as of earlier this week the dow was lower than when george bush took office. and the u.s. is $4 trillion deeper in debt. that's a 71.9 percent increase in red ink, while at the same time we're told we have no money for children's health care, education, veterans' benefits, collapsing infrastructure, or rebuilding new orleans, to name a few relatively small-budget items.

strangely, there's no shortage of money for an illicit war in iraq, no-bid contracts, giveaways for big oil, and a deregulated financial industry run amuck.

a mccain administration would take the worst of bush and make it worse, by mere dint of staying its wretched, toxic course. and we haven't even mentioned sarah palin.

despite the fact that bush was elected twice, we're left to hope america has not, yet, sunk to skewering itself and climbing up onto the spit.

because there's no point in putting lipstick on a barbecued pig.
Posted by spaceneedl at 8:50 AM No comments:

CBS instapoll showing that undecided voters watching the debate thought Biden won by 46 percent, compared to 21 percent for Palin. (UPDATE: CNN poll on “Who Did the Best Job In the Debate?” Biden 51% Palin 36%)

i had dinner at the home of a good friend who is a dismayed republican. he wanted sarah palin to do well. but he was constantly calling her out.

at the end, he said, "she held her own. she was likeable."

that's why we're friends.
Posted by spaceneedl at 9:53 PM No comments: