What Dreams May Come

The dreams have been bizarre, and hyper-real, for months.

Almost always they're filled with people I don't know, in places I've never been. 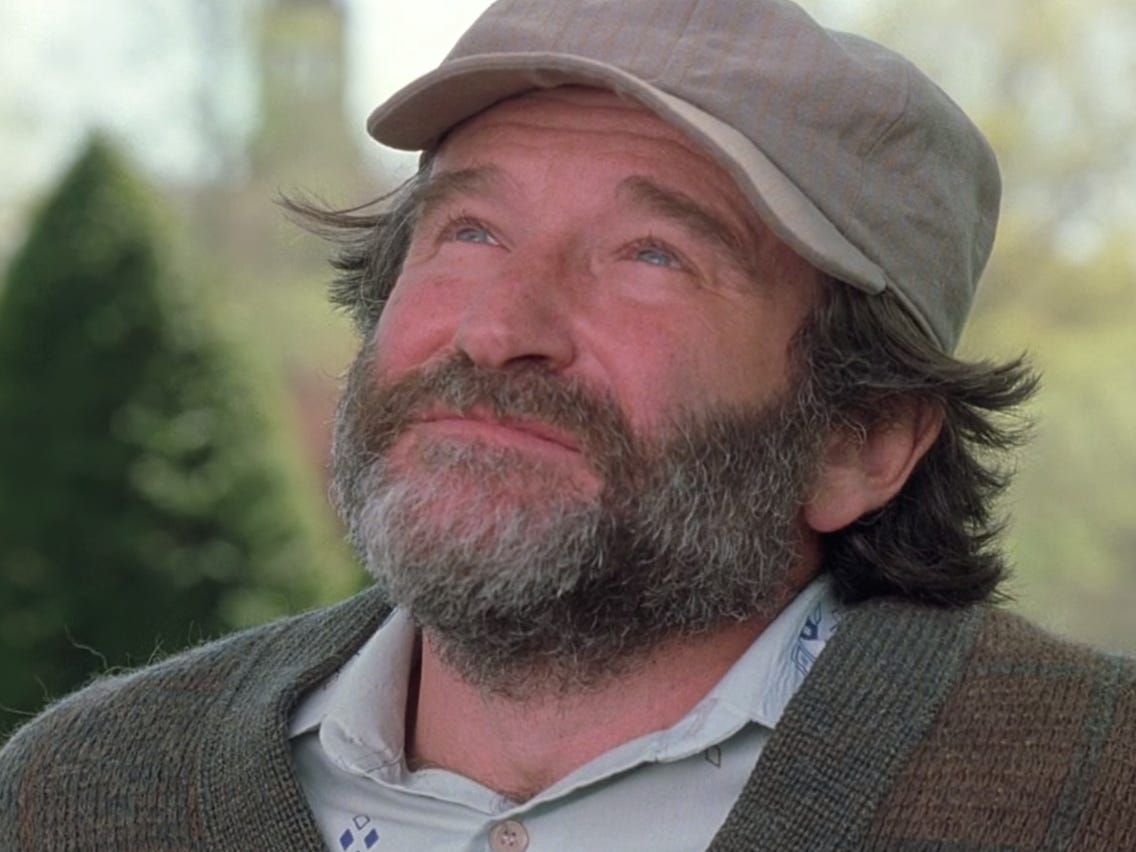 I spent part of last night with Robin Williams. He was homeless and hungry, and I offered to buy him some food. We walked a crowded city street (I don't know what city or which street) until we found a block filled with restaurants.

People recognized him along the way, but kept their distance, maybe because he looked like a homeless person. Me, I just wanted to help him, and was glad to spend some time with him. In the way of dreams, it didn't seem odd that he was alive and walking with me, close enough to see the rough texture of his long canvas jacket. Oh, and the beard, which looked like the one he wore in "Good Will Hunting".

He wanted some Chinese food. We found a communal table, but not two seats together. I directed him to a chair opposite mine ("Why don't you sit there, Robbie," I said), and encouraged him to order whatever he wanted.

We sat and ate together for a while. Then, as dreams do, this one flowed on to something else I can't remember.

I had forgotten all about it until I stumbled across a tweet this morning:

"He offers me a faint smile. I am deeply grateful he is alive. It means a lot to me in this moment. Everything. As he walks away slowly I remember a year ago, when he came up and slapped me on the back gregariously, saying hello. "Survival doesn’t mean nothing died."

—Sayed Tabatabai, MD
***
Doctor Tabatabai's tweet was about COVID, and soul-deep fatigue, and moving forward by sheer momentum.
One minute I was marveling at his exquisitely skilled use of language, the next I was right back with Robin Williams. And I was grateful.
***
I don't know what any of this means, but I highly recommend the Twitter thread that brought it back to me.
Posted by spaceneedl at 11:09 AM No comments:

We need to stop thinking about the upcoming election in conventional terms.
We need to stop caring about how the debates will go, and what voters in swing states will do, and how awful Amy Barrett is.
Barrett's views are irrelevant. She's an illegitimate nominee participating in a corrupt process. The SCOTUS already has one illegitimate member in Neil Gorsuch; if this one is seated, the Supreme Court itself will be irreconcilably defiled and unworthy of regard.
And even *that* doesn't matter right now.
What does matter is what we'll do when there's no clear winner on Nov. 3, and Trump declares any result other than his victory to be invalid. When heavily armed militias take to the streets to support cops who will be suppressing mass protests. When the National Guard gets involved in major cities across the country and local governments break down.
If you think this scenario is implausible...well, I hope you're right.
In the meantime, we have a little more than a month to hope for the best and prepare for the worst.
Posted by spaceneedl at 10:32 AM No comments:

When I look into your eyes
It's like watching the night sky
Or a beautiful sunrise
There's so much they hold
And just like them old stars
I see that you've come so far
To be right where you are
How old is your soul?
Well, I won't give up on us
Even if the skies get rough
I'm giving you all my love
I'm still looking up
I Won't Give Up—Jason Mraz
***
Four a.m. is now canine o'clock at our house.
This wasn't always the case.
Before Lucca and Kate left us a few months ago, we all typically slept straight through 'til dawn (and as long as we could after that). But losing them taught us a few things:
1. We're not a one-dog family
2. There are a LOT of dogs out there who need a good home
3. Sleep is overrated 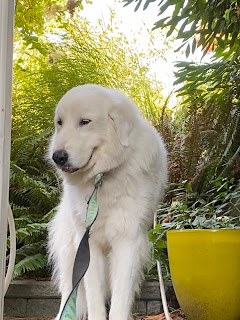 Sophie joined the family a couple weeks ago—because Melissa fell in love online with a big ol' nine-year old Great Pyrenees no one seemed to want.
Sophie's file told us little, other than she'd been surrendered by two families, the last of which had her on anti-anxiety meds. Because she "wanted to go outside all the time, and would try to dig under the fence." If you can imagine such a thing.
Her last foster dad, bless him, knew Sophie was just doing what Great Pyrenees are supposed to do—patrol the perimeter and guard the flock. He immediately took her off the meds, and established a routine that allowed her to do her job and *be* a Great Pyrenees.
In short, we couldn't see any reason why this good girl was bounced around so much—and we promised her this would be the last time. She's home.
***
In the handful of days she's been here Sophie has slowly, steadily allowed us to weave our lives together. By the day, and sometimes by the hour, she shows us a little more of who she is beneath all that fur.
We expect this process to go on, uh, forever. She's a thinker, this one, and she has opinions about things. We'll be heading one direction on a walk, for example, and she'll spontaneously decide it's time to head somewhere else. If we insist our direction is better, she'll sit down like a mule. If we're adamant, she'll proceed to lie down. At that point, we talk it over for a while and most often agree she was right all along.
She teaches. We learn.
***
Kate and Lucca never wanted more than to spend time with all of us, together. Sophie, on the other hand, likes her personal space and her quiet time away from the everyday din.
Our girl doesn't have much use for clocks. Or long-established circadian rhythms. She doesn't differentiate between daylight and nightlight.
Four a.m., she has declared, is dawn-patrol time. So, out we go.
It's not obvious to us yet, but we're sure one day she'll reveal the evolutionary benefit of this ancient ritual. In the meantime, though...
...we've adopted a 13-week old puppy.
Her name is Twyla.

She has opinions about things, too. Already.
***
And when you're needing your space
To do some navigating
I'll be here patiently waiting
To see what you find
'Cause even the stars, they burn
Some even fall to the earth
We've got a lot to learn
And God knows we're worth it
No, I won't give up on us
Even if the skies get rough
I'm giving you all my love
I'm still looking up
I Won't Give Up
Posted by spaceneedl at 4:57 PM No comments: