i have a recurring nightmare that will get no sympathy.

some people have anxiety dreams about walking around naked, or showing up to class and it's finals day and they haven't studied, or being chased but unable to run away.

i have stress dreams about playing golf at pebble beach.

the theme is always the same. somehow i'm at one of the hallowed cathedrals of golf (a game i used to play with some enthusiasm), and i'm completely unable to hit the ball because i haven't touched a club in years. most often it's late in the day and we're trying to hurry around the course before dark. of course there are groups behind us, also wanting to finish, completely exasperated by my incompetence.

i wake up tired and stressed, wondering what the hell that was about.

but i suppose it's better than being chased by monsters.
Posted by spaceneedl at 9:56 AM No comments:

my daughter and i gave five bucks to a homeless-looking guy on the corner. he handed her this... 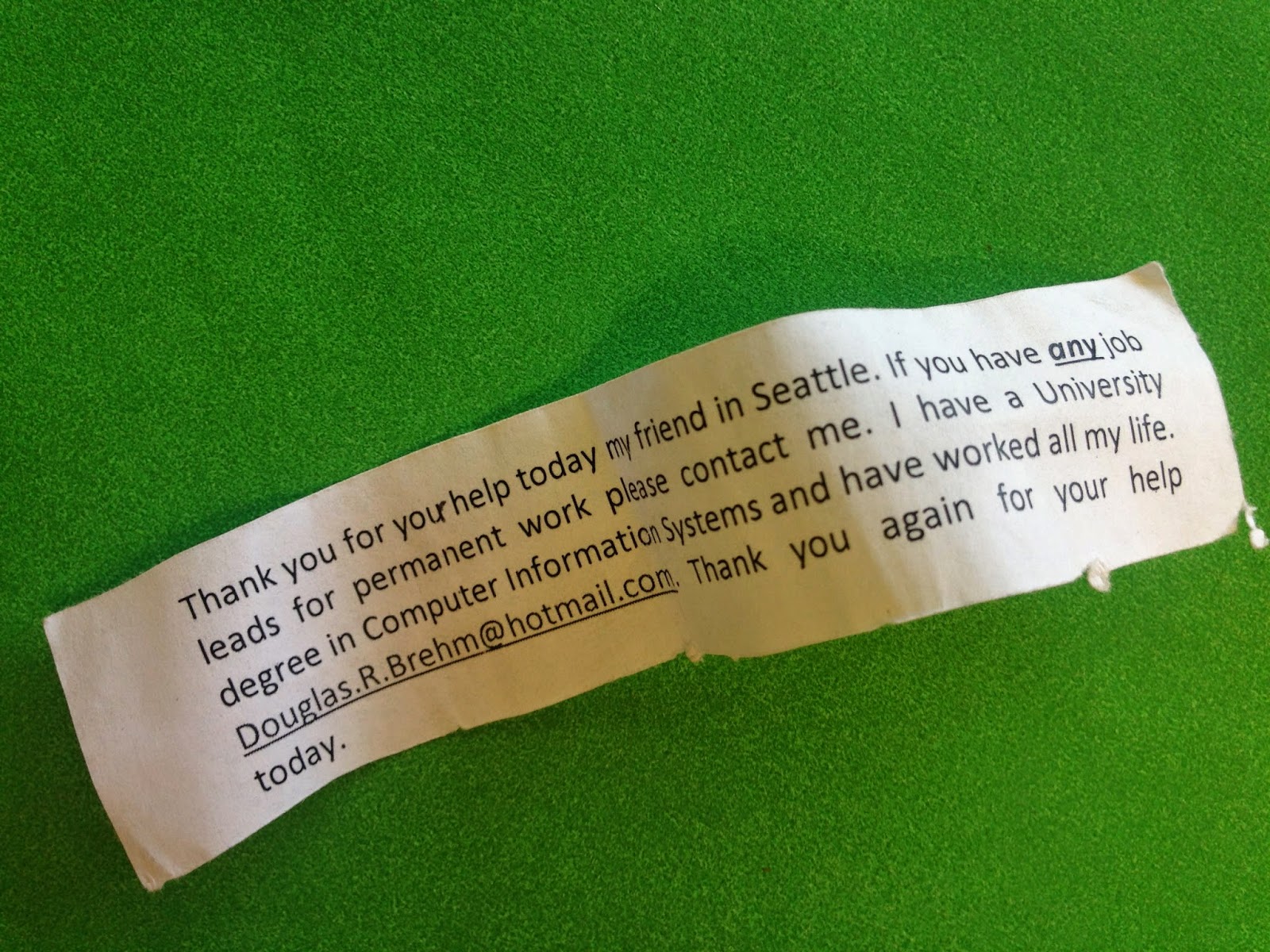 anybody need an IT guy?

Posted by spaceneedl at 9:57 AM No comments:

will run for wine

i ran a little race on saturday.

i needed some kind of organized event to keep my streak going (now at 28 months, but who's counting), and the columbia winery 10k was it.

it was my first non-trail event in a long time. the last one was the lake chelan marathon, which was september 2013. apparently i like trails.

the course, in part on the sammamish river trail (which i run often), was flat and fast. much faster than i'm used to running.

on unpaved trails i generally run 9- to 11-minute miles. saturday i ran at a 7:15 minute/mile pace. not fast compared to most, but for me it was moving right along.

but i did notice columbia makes a grenache rosé, which i am going to have to check into.

Posted by spaceneedl at 1:53 PM No comments:

***********
i'm standing here cycling through the many ways robin williams made me feel.

and i keep coming back to one that has been true for years: awe.

when i was much younger, it was enough that he was outrageously funny, in a runaway high-speed train sort of way. i mean, i laughed at the humor in his standup operatics (you absolutely cannot call them "routines"), but it was the delivery ~ the topical theatrics, the manic digressions, the painfully profound wisdom, and the nuclear thread fusing them together ~ that dilated your brain.

even back then, i didn't think of him as a "comedian." the word is too small to describe what he did. and though the G-word is overused and underdelivered, robin williams was a genius of some sort. "mind-bending," maybe. or "effortless" or "profane" or "pure" or some other word that escalates "genius," because that word isn't big enough, either.

that's what we saw onstage or onscreen. a preposterous expression of writing and stagecraft and camera work and editing and a thousand other details. it was like watching a fiercely intelligent blowtorch.

behind the scenes, maybe "distraught" or "stricken" or "broken" was more apt.

***********
as the years swept by, i thought williams' best performances were when he wasn't being funny. the inexorable craft he demonstrated in moscow on the hudson. the agony of the fisher king. the vulnerability in dead poets society and good will hunting. the rage of good morning viet nam. and what dreams may come...that one still leaves me, uh, emotionally compromised.

he had the benefit of brilliant writing in those roles, but it was the all-in fearlessness he brought to them that will always stay with me.

***********
i was stunned the day i heard robin williams had died. i knew he had brawled for years with depression ~ but i guess i thought that fight was behind him. then i read he was in the early stages of parkinson's disease. it's tempting to write, "...and it all made sense." but it didn't. not really.

no more so than anything else in this life.

today, the shock is wearing off.

but sense of loss rolls on.

"To quote from Whitman, 'O me! O life!... of the questions of these recurring; of the endless trains of the faithless... of cities filled with the foolish; what good amid these, O me, O life?'

"What will your verse be?"

Posted by spaceneedl at 1:40 PM No comments:

as you probably recall, you and i shook hands back in 2006. twice, in fact.

it was out in front of the chicago tribune building, where you had just met with the editorial board. there was a camera crew outside, to whom you gave a couple minutes, and then you worked the pedestrians and passers-by a little bit.

those people really liked you. they smiled and encouraged you to run for president. we shook hands on your way up the street (i said something clever like, "nice to meet you, senator."), and then again as you worked back the other way. no idea what i said that time, but maybe you remember.

in the months leading up to the 2008 election, i campaigned for you and raised money for you. i believed you would lead the anti-bush administration, that you would be the guy who would swing the pendulum from the batsh*t-crazy right back to the left.

and don't get me wrong, you've done some extraordinary things. for one, you turned around an economy in total meltdown. and i really appreciate obamacare, not to mention the supreme court justices you've appointed. they will make a huge, positive difference for a lot of people for a long time.

having said that, barry, you and i can't hang out together any more.

I understand why it happened.  I think it’s important when we look back to recall how afraid people were after the Twin Towers fell and the Pentagon had been hit and the plane in Pennsylvania had fallen, and people did not know whether more attacks were imminent, and there was enormous pressure on our law enforcement and our national security teams to try to deal with this.  And it’s important for us not to feel too sanctimonious in retrospect about the tough job that those folks had.  And a lot of those folks were working hard under enormous pressure and are real patriots."

barry, you're a constitutional law professor. you, more than most, know words have power and meaning. you know this, and yet you just stood up before the whole wide world and said being afraid is an excuse to do unconscionable things.

you just said that when people are working hard under enormous pressure, anything goes.

and you characterized a pack of ravening war criminals as "real patriots."

does pointing all this out make me "sanctimonious"? if so, i don't care. because defining-down sociopathic behavior as "patriotism" is more than just grotesque. it guarantees that the same thing will happen again in some future crisis. it also ensures the same behavior will be practiced against america ~ because what's legit policy for the US is legit for everybody else.

i hate to state the obvious, especially to the constitutional law professor in the room, but we're either a nation of laws, barry, or we're not. we either walk the talk, or we don't. (and if you ever want to use the phrase "american exceptionalism" with a straight face, you don't let the war criminals off the hook because they were stressed out.)

"we tortured some folks."

seriously? you make it sound like the bush administration hazed a few pledges at a fraternity party.

what really happened is that the united states officially adopted a policy of "...international kidnappings (euphemistically called "renditions") of terror suspects, including completely innocent people the CIA snatched off the streets of global cities, as well as from the backlands of the planet and "rendered" into the hands of well-known torturing regimes (with the help of 54 other countries) and the setting up of a network of "black sites" or offshore prisons where anything went, the CIA tortured up a storm. And it did so at the behest of the top officials of the Bush administration, including the president and vice president."

barry, i could go on and on, but what would be the point? you know all of this, in gruesome detail. and we haven't even mentioned the war ginned up for no good reason whatsoever.

i don't get how you can shrug all this off, like it's nothing. sorry, i can't. or maybe more accurately, i won't.

if that makes me sanctimonious...i guess i'll just have to learn to live with it.
Posted by spaceneedl at 6:05 PM 2 comments: