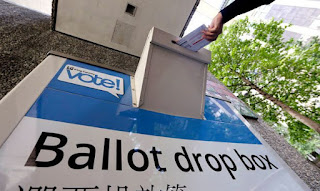 "Ballots were mailed out to voters this past Wednesday. Typically, King County Elections workers don’t start emptying drop boxes until the first Monday after ballots are mailed, Hodson said.

"But this year’s election is already proving extraordinary. 'Knowing there was so much enthusiasm to vote, we decided to start pickups on Saturday,' Hodson said.

"That decision paid off, because multiple drop boxes filled up Saturday, and some had to be emptied more than once, including a drop box in Ballard.
"Each drop box holds up to 5,000 ballots."
Our ballots finally arrived Saturday evening, two to three days after other parts of our neighborhood received theirs. Me, rhetorically, to loving wife on Friday:
"Where the fuck are our ballots??"
We vote every election, but never, ever, did I think I would be so viscerally invested in the temporal status of a ballot.
It's been reported that turnout in King County could go as high as 90% this election, up from an amazing 85% in 2012. When you're used to years of (a)pathetic turnout in the US, 90% suggests something volcanic is underway.
In our neighborhood, cars typically line up at the local drop box the day before and the day of an election. This year the parade started two weeks early—including both days over the weekend.
My ballot is now filled out and in its security envelope. The drop box is 90 seconds away from our front door, if I'm running (and I will be).
Vote.
Vote like you would if you were on a ventilator. Or if someone's knee was on your neck. Or if you were being teargassed. Or if you've felt a dead weight sitting on your soul for the past four years.
Vote like it might be your last chance.
Vote.
Posted by spaceneedl at 12:52 PM No comments:

You gotta love the Associated Press. 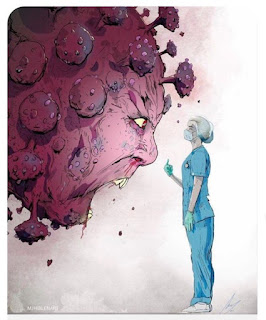 Today the AP published a brief piece headlined "How Do I Politely Ask Someone To Wear A Mask?", with the same genteel delivery that one might ask a shopper not to bruise the bananas in the produce aisle.

"'Experts say you should make the request discreetly because shaming the person could put them on the defensive. If they feel violated by the way you approach them, they are much less likely to make a change,' said Jan Kavookjian, a behavioral scientist at Auburn University."

Call me contrary, but behaviorally speaking, the person not wearing a mask in public at this stage of an ongoing nightmare of a pandemic is NOT THE ONE BEING VIOLATED.

How discreetly do you suppose Dr. Kavookjian would address someone swinging a machete in a public place? I mean, in one hand you've got COVID-19, in the other you have a machete—both can leave you with long-term organ damage or kill you outright. Shall we be careful not to shame the person with the machete?

Also, if you're "making the request discreetly," doesn't that assume you're doing so quietly, so no one else hears? As a matter of verbal communication, how close do you have to get to an unmasked person, in public, to make a discreet request? IDK, BUT I BET IT'S CLOSER THAN SIX FEET.

"Public health experts say masks are key to reducing the spread of COVID-19. But asking a stranger to put one on could still result in a volatile situation, since they may not be easily persuaded."

Point of order: isn't it the stubborn, maskless person creating the potentially volatile situation? If by "volatile" we mean, "prospectively killing or maiming the people around them," then, yes! Yes, they are.

In which case, isn't AP putting the burden of politesse on the wrong party? In a court of law, if one swings a machete in an uncontrolled manner and cleaves an innocent bystander, who's legally liable?

Hint: NOT THE PERSON WEARING THE MASK.

"Rather than risk a confrontation, experts say it might be best to steer clear of people without masks in public if you can."

This seems like a good time to define a word, and today's word is: sociopath.

noun, Psychiatry.
"a person with a psychopathic personality whose behavior is antisocial, often criminal, and who lacks a sense of moral responsibility or social conscience."
So, over here we have Person A, say, grocery shopping, wearing a mask to mitigate the risk of contracting or unknowingly spreading a highly contagious and proven-deadly disease. Over here, we have Sociopath B, in the same store, swinging a machete.
"Experts say" rather than reward and reinforce the socially conscious and morally responsible behavior of Person A, s/he should clear a path for Sociopath B to continue their crime spree, unburdened by shame or responsibility.
Random observation: enabling and reinforcing undesirable behavior rarely leads to desirable behavior.
Back to the AP, in closing:
"According to etiquette expert Diane Gottsman, if you do find yourself interacting with someone who is not wearing a mask, you might say something like, 'For your safety and mine, I would feel much more comfortable if we were both wearing masks.'”
Before I say something like that, I'd like to see the data on successful use of passive-aggressive sentences in a potentially volatile situation. Sadly, AP and Gottsman offer none.
But it occurs to me that many, many people across the country HAVE tried the "polite response" for months now.
Which may be why 210,000 formerly polite people are now dead people.
Maybe it's time we tried something different.
Vote. Like you're not a sociopath with a machete.
Posted by spaceneedl at 3:30 PM 1 comment: