i'd rather be stayin' in


headin' out to san francisco
for the labor day weekend show...
and honey i didn't know that i'd be missing you so
come monday, it'll be alright
come monday, i'll be holding you tight

i'll be there over memorial day, and the boy's birthday, to boot. no, i'm not kidding, and i'm not amused.

true, we had an early birthday celebration for him, and all the spaceneedls were together in a far-flung place last week. so it's not like this is a tragedy.

but there are times when the work-life balance is all effed-up. and it never seems to be in favor of the "life" part.

funny how that works. ha ha. and yet, as previously noted, i am not amused.
Posted by spaceneedl at 8:14 AM No comments: not me. i'm still not boycotting.

until after this weekend.
Posted by spaceneedl at 8:03 PM No comments:

gold in the desert 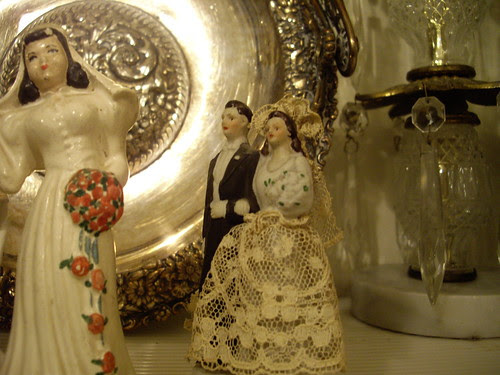 politically, i would prefer to boycott arizona.

instead, we're just a few days from hosting an event in scottsdale.

in addition to the wedding we're attending on saturday, all the spaceneedls near and far are gathering sunday for a celebration of my parents' 50th anniversary.

so, on this auspicious occasion we're setting aside the political for the personal and the parental. despite the fact that we'll be behind the lines, amidst a retinue of right-wing relatives.

for this celebration of the half-century, i'm totally prepared not to talk immigration law and ethnic studies and the "we're all arizonans now" gibberish spouted by the unemployed half-term governor from alaska. these opportunities don't come along every day, after all.

i can make this proclamation as long as no one on the far right runs their mouth without engaging their brain. if that happens, no one would blame me for gently inserting a stray fact or two into the mix. verdad?

where was i? oh, yes...setting aside politics. i can totally do that. i can simply bask in my parents' enjoyment, as well as the sunshine forecast for the event. i can turn my face to the sun while turning the other cheek. i can avoid politically charged topics while recharging my solar batteries.

i want to set a good example for the newlyweds, after all. not to mention for the happy couple married almost as long as i've been alive (kidding, mom!). come to think of it, my children will be in attendance, too. that's good examples for three constituencies at least...not that i'm counting.

what could possibly go wrong in that scenario?

my pledge to my parents: in the heat of the desert, i'll leave the heated rhetoric to others. worst case, i'll referee and send everybody to the bar...after which everybody flies back to their respective corners of the country.

after 50 years of parenting, it's the least i can do.

maybe one day my children will do the same for me.
Posted by spaceneedl at 9:06 PM No comments:

if he hadn’t been asleep in the clubhouse, the mariners wouldn't be in an unrecoverable tailspin. they wouldn't have lost 10 of their last 12 games.

and the players wouldn't be freezing out a longtime beatwriter who had the nerve to report pesky facts about junior sleeping in the clubhouse during yet another season-killing loss.

we in america demand more from our sports icons.

where was junior when the oil rig blew up? sleeping in the clubhouse.

where was he when the arizona legislature passed its odious racial profiling legislation? snoring on his sofa.

didja know tiger woods pulled out at the players championship? and by that i mean "he walked off the course during the fourth round complaining of a neck injury." where was junior? putting on a sleep apnea clinic.

if the mariners want to pay the guy $5 million to be ichiro's designated tickler, that's their prerogative. if don wakamatsu doesn't think junior's a good pinch-hitting option over a catcher hitting a terrifying .140, hey, he's the manager.

but if junior's gonna be aleep at the switch while the rest the world falls apart around him...

the oldest person in the world died this week.

The world's oldest person, a Japanese woman on the southern island of Okinawa, has died a week before her 115th birthday, a spokeswoman said Wednesday.

i don't think it was "her time to go," necessarily. i think she was just pissed off and wasn't going to take it any more.

after several decades to think about it, she might've been increasingly annoyed that yet another generation of kids was growing up with no respect for tradition. she might have been in high dudgeon that an unruly teenager would run onto the field during a baseball game. even so, surely she was shocked to learn that the penalty for running around the outfield during the all-important phillies-cardinals game is to be hit with a few thousand volts of electricity.

did you know that hundreds of people have died after being tazed? it's true! so it's entirely possible that the penalty for teenage foolishness at a ballgame might've been death. gee, baseball's a tough sport, isn't it?

speaking of capital punishment, sort of, cops in oakland blew away bambi this week.

"...under orders to "dispatch the deer," officers shot it seven times before it died. Animal control officers were also on the scene.

Officials said the deer was gunned down because 'it was acting disoriented in an urban environment.'"

kama chinen might've been disturbed to learn that the penalty for being confused in an urban environment is death. if that's the standard these days, the vast majority of city dwellers will not only not live to be 115---many of them won't last the week.

as someone said, if you were lost in the woods, you might be acting disoriented as well. good thing bambi and his friends aren't packing heat, then, huh?

do you think kama chinen remembered hurricane katrina and FEMA director michael brown? was she cursed, like the rest of us, by an indelible memory of the half-wit president saying, "brownie, you're doing a heck of a job"?

(if by that he meant brownie was doing a heck of a job killing people, as if he were holding their heads underwater himself, then yes, brownie did one hell of a job.)

that memory alone might've been enough to push kama chinen past her breaking point. but no, there was more. brownie wasn't done killing crowds with his laseriffic perspicacity. squinting conspiratorially on fox news this week, he said the obama administration may have welcomed the damage from the river of oil (still) pouring into the gulf of mexico. because...secretly, the administration didn't support the oil companies, and wanted to shut down offshore drilling altogether.

brownie, it should be noted, is an incoherent boob whose next intelligent syllable will be his first. the fact that he's expert at arriving on the scene of a bad situation and making it much worse makes him the perfect sort to feature prominently on fox news.

how grateful are the people of nashville that brownie wasn't first on the scene of their current disaster?

Amidst the news of a car bomb attempt in New York City and the oil slick inching towards the Gulf Coast, the flood that has devastated Nashville, TN and the surrounding areas got lost.

National news outlets are reporting the story, but the damage is far, far worse than viewers are hearing.

as bad as it is, it could be worse. the brown reaper could be there wading through the streets, swinging his scythe from the grand ol' opry to dollywood. waving a "mission accomplished" banner as flood-drenched, half-drowned residents flee in panic, leaving the city a shell of its former grandeur, to be replaced by an ersatz, disneyfied replica for the tourists who go home and say, "new orleans has really bounced back, we had a great time there!"

did i say new orleans? i meant nashville. obviously.

the list of the week's pernicious events goes on and on. and on. any of them could've been the last straw for someone frail and diminutive and exhausted by humanity's changeless idiocity. let's face it, when you're 115 years old, it probably doesn't take much to rush you up to the end of the diving board...and just a little bit beyond.

the way things are going, if this week hadn't gotten little kama chinen, the next one shirley would've.
Posted by spaceneedl at 3:19 PM 3 comments: 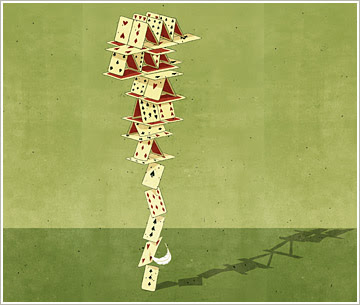 mrs. spaceneedl has a job.

when she lost her last job, she was certain it'd be months before she found another. she had visions of calendar pages flying off with no prospects in sight. i thought she was wildly mistaken, and told her so, but she was undeterred. disaster was nigh, the wolf was at the door, and the cavalry was nowhere to be seen.

so far i've resisted the urge to say, "i told you so," but if the right moment comes along, i'm neither above it nor beneath it.

i understand her apprehension--we're built to be a two income family. we can hop along on one leg for short distances, but pretty soon we're face down in the mud.

the fact that 98% of the country is similarly situated comforts us not at all.

anyway, as of last friday the calendar pages are where they belong, the wolf has temporarily retreated (it's always at the door, you know), and our little house of cards is slightly more stable.

for the moment, mama's happy.

that should last at least until the work-related travel begins.
Posted by spaceneedl at 8:31 PM No comments: