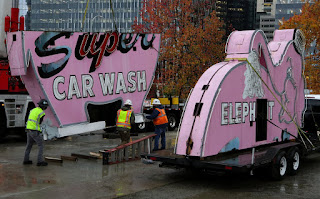 Time, time time, see what's become of me
While I looked around for my possibilities
I was so hard to please
Look around
Leaves are brown
And the sky is a hazy shade of winter
—Paul Simon
***
At a time when time has no meaning, it's still possible to give the side-eye to its passing.
In 1956 a neon, pink elephant sign was installed on a busy corner in Seattle. It stood there for 64 years, becoming an iconic little landmark along the way.
And, now it's gone.
The owner of the property said his company has no current plans for the empty lot, but the sign had to go—maybe he just hates beloved local landmarks, IDK.
Some cultures worked *so* hard to remind future generations of their existence. They built myriad pyramids, edifices, and monuments that survived millennia. They trundled and carved and stacked stone in centuries-long endeavors that their descendants could gawk at *forever*.
Americans, meanwhile, are over here tearing shit down for any reason, or no reason at all. Our most enduring brand is intentional obsolescence. There's a whole "impermanent" school of thought in American architecture, for example, that prefers transient design and construction because more long-standing buildings are "too restrictive."
Currently the largest (and probably most permanent) human-made structures on Earth are the tailings ponds of the Alberta oil sands project. They're big enough to be seen from orbit, and contain "a toxic slurry of heavy metals and hydrocarbons from the bitumen separation process."
Our descendants, if they're able, will gawk for different reasons, probably not out of admiration for our ingenuity.
Where was I? Oh, the pink elephant.
Its loss is nothing, of course, in the time of COVID and other pressing issues. Besides a few maudlin Seattleites, who's gonna miss it?
With that in mind, we should absolutely tear down the Space Needle. It's been taking up valuable real estate since 1963, and you can bet Amazon would love to get its hands on that land.
Also, the Monorail? Totally overbuilt anachronism. You know what would be more in keeping with our love of cheap thrills and turning a quick buck? The perfect monument to a distractible, transitory culture?
A zip line!
***
"The 5,000-pound sign will first go to Western Neon in Seattle’s Sodo neighborhood for conservation work, before heading to the Museum of History and Industry (MOHAI) in South Lake Union."
Posted by spaceneedl at 7:30 AM No comments:

Get Your Chainsaw Away From My Car

"All living creatures, from the simplest biologically to the most complex, demonstrate a survival instinct.
"This sense of self-preservation is, in the biological literature, a nearly universal hallmark of life on Earth, and the foundation of rational thought and behaviour.
"Consider the amoeba, a brainless, one-cell organism that retreats from threats and seeks to avoid such threats in the future.
"Amoebae aren't able to think, because no brain, but at least, from an evolutionary standpoint, they harbour the potential for rationality in some distant future.
"This is in direct opposition to the red-topped maga, a brainless creature which harbours no such potential."
David Attenborough—Zoo Quest to America
***
While the impulse for self-preservation is ubiquitous, the natural world teems with species that actually *defend each other* in times of danger. Chimps, dolphins, elephants, lions, orcas, and wolves, to name a few—all will put themselves at risk to defend other members of their pack/herd/pod.
You know who won't tho?
As COVID-19 rages around us, many of our fellow humans are proudly, happily putting everyone at risk.

That's not quite right: what they're actually doing (and there's no getting around this), is trying to kill us.

Every time they go out without a mask or gather indoors like grinning idiots or encourage others to 'rise up against tyranny', they are literally trying to kill people—as surely as if they'd cut the brake lines on every car in America.

So far 11 million of us have crashed, and 250,000 have died, and when we scream, "Stop cutting brake lines!" they yell, "Actually, most people don't die when their cars crash!" as they take a chainsaw to more brakes.

REPORTER {over chainsaws}: "As you can see, the saboteurs are crashing and dying as well...their bodies are all around us here, and in the refrigerated trucks over there! But they don't seem to notice, or if they do notice, they just don't seem to—watch out watch out watch...!"

{car careens into shot, camera falls to pavement, video transmission fails, audio continues to record screaming}
***
From an evolutionary perspective, the most successful species are those most adept at adapting to change. Those that fail to learn the lessons of their ancestors are inevitably selected for extinction.
Related: Republicans with chainsaws are coming for your cars.
#adapt
Posted by spaceneedl at 10:34 AM No comments: