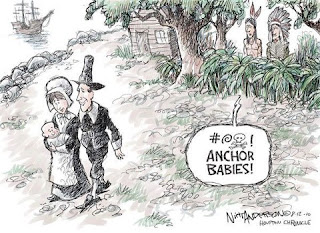 "my use of racist jargon doesn't make me a racist. besides, i was talking about asian people."
~ jeb bush

...that some lowbrow, low down, low-life caucasian americans don't embarrass themselves in front of the whole wide world, and cause the rest of humanity to painfully cringe.

at a time when most sentient americans are ready to shine a bright light on boorish and bigoted behavior to prevent its recurrence...some reprobates among us are undeterred.

and we wonder why donald trump continues to poll so well among a certain constituency.
***********
cringe #1: jeb bush uses an offensive term to describe a nonexistent problem, tells people not to be so sensitive about offensive terms.

"When told, in Spanish, that many in the Latino community consider 'anchor baby' an offensive slur, Bush rolled his eyes and replied in Spanish: 'Look, I know Hillary Clinton is attacking me for using that term, but it is ludicrous to suggest I’m using a derogatory term. Frankly, it’s more related to Asian people coming into our country, having children, and taking advantage of a noble concept, which is birthright citizenship.'"

cringe #2: a tourism train company with a long history of solicitously accommodating drunken behavior by customers boots a women's book club off the train, allegedly for "physical and verbal abuse toward other guests and staff." in what can only be described as a strange coincidence, most of the women in the book club were black.

the company defended its actions in a post on facebook...but later removed the post when other accounts of the events begin to surface.

“I'd like to think it wasn't a racially motivated act, but given the fact that other, non-black guests were behaving in the same way and not removed, I can only conclude that it was discrimination.” 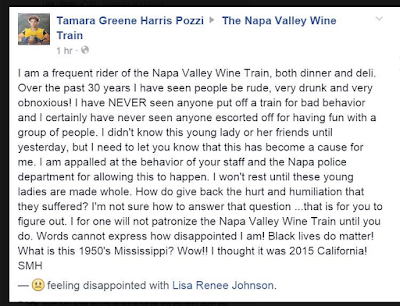 turns out it's really hard to get booted off the wine train. in fact, no one can seem to recall it happening. from yelp (via slate)...

in its uniquely endearing way, the internet is stepping in to, uh, help the wine train folks upgrade their hospitality. recent yelp reviews of the company are exquisitely scathing, and its facebook pages are drowning in scorn.

but here we are, days after the fact, and the napa valley wine train has yet to admit it jumped the tracks. disastrously.
***********
it's been almost fifty years since the rev. martin luther king gave his life in the cause of racial justice and equality. and while much lip service has been paid in the intervening decades, it's painfully obvious that little actual progress has been made.

ill-mannered and bone-ignorant white folks still hold undeserved positions of authority and responsibility...and not a day goes by that non-white folks don't pay a price for having the "misfortune" not to be born more pale.

Posted by spaceneedl at 9:55 PM No comments:

that's the best you could do?

last evening on a group run through discovery park, we passed a car at a stop sign.

"faggots!" yelled a male voice from the car.

it's unclear if he believed all runners are gay, or if we were just running in a particularly gay way.

regardless, we laughed, and figured it was the best he could do on short notice. or that perhaps "run, forrest, run" was beyond his verbal abilities.


Posted by spaceneedl at 4:01 PM No comments:

law of the jungle

bear does what bears do, must be killed for it.

go figure.
Posted by spaceneedl at 3:42 PM No comments: