running off at the mouth 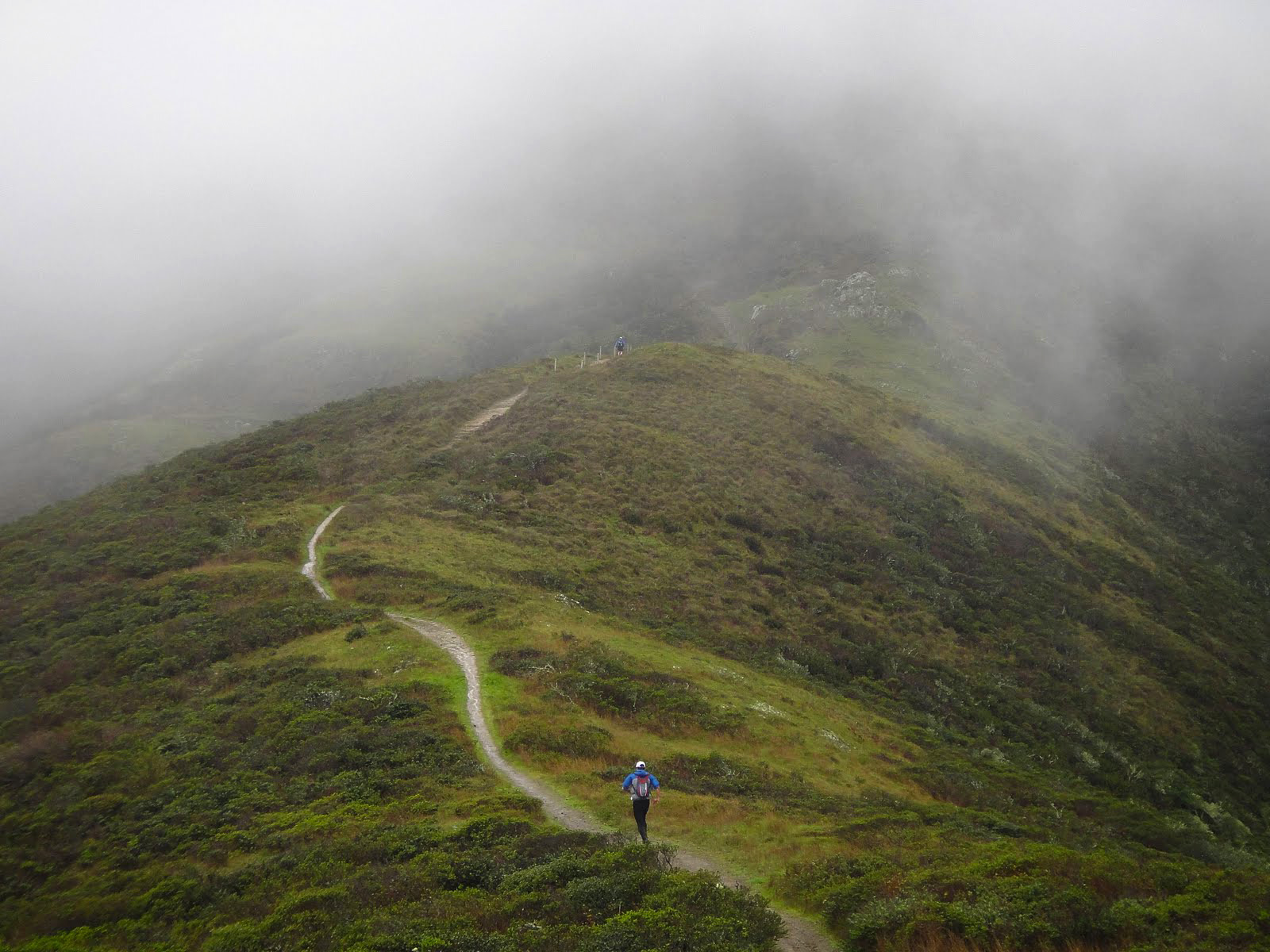 pounding down the mailbox peak trail my friend jonathan and i passed three hiking gents whom we had passed on the way up.

they stepped aside to let us go by, and one of them said, "you're going to wreck your knees."

"i hope not," i said over my shoulder.

not a very friendly thought to share in passing, i'd say.

also, not supported in the clinical literature.

humans are born to run. we evolved to forage in the savannah and to chase down game over long distances. to suggest that doing what we are built to do is bad for us is just straight-up wrong.

but thanks for the warning, hiking dude. i'll try to remember it next time i blow by you on the trail.
Posted by spaceneedl at 3:32 PM No comments:

the politics of disambiguation

"just when i think i'm out, they pull me back in."

~ al pacino in godfather the third


"never hate your enemies. it affects your judgment."

with the 2016 election season looming like a noxious cloud, a dark, cynical part of me thinks it doesn't matter who is president of the united states of america.

i look at the list of prospective "candidates" and think the promise of america is true: anyone ~ no matter how immoral, incoherent, or otherwise unqualified ~ can grow up to be president.

then i remember barack obama, and i feel better. briefly. until i remember the bush administration, and i mentally puke.

the closer it gets, the less i want to engage in this cycle at all. the idea of wallowing around in US politics (again) makes me want to shower off with a bleach firehose.

and yet, here we are. some friends are committing to getting democrats elected, while others commit to further sabotage our little experiment in democracy.

don't misunderstand: i don't love democrats. as a general matter they are far too conservative for my taste. and the increasingly likely prospect of hillary clinton as president is, um, discouraging.

but i dislike her and her fellow corporate democrats much less than the horror show of the other major party. no shower can wash that stench away.

okay, i know, it does matter who becomes president #45. whoever it is will likely appoint a supreme court justice or two, as well as a bunch of other judges-for-life. s/he will continue turning our ship of state away from the rocks put in our path by the other party...or he will guarantee we crash headlong into them.

which is why, really, there's no sitting this one out. the lesser of two evils is still evil...but the alternative is no alternative at all.


pacino: "My father is no different than any powerful man, any man with power, like a president or senator."
keaton: "Do you know how naive you sound, Michael? Presidents and senators don't have men killed."
pacino: "Oh. Who's being naive, Kay?"
Posted by spaceneedl at 3:00 PM No comments:

"this is great, this is really f*ckin' great. we're in some pretty sh*t now, man."

(also, my brain before the chuckanut 50k.)

i'd like to say i went into the 2015 chuckanut 50k burbling with confidence.

i was as trained up for it as i could be, minus three sort-of-important weeks lost to a soleus injury. still, i was able to pile up some pretty good miles after that setback, and might very well have felt good about that.

except for the sense of dread that ensued instead.

maybe it was the entirely unpleasant experience at the chuckanut mountain marathon the summer before. maybe it was the three weeks lost and the niggling pains that accumulated while i was trying to make up for lost time.

either way, on game day i was not in the best place, mentally. there was no burbling going on. but at that point there was nothing left to do but line up and see what was what.

the first 10k pace on the interurban trail was entirely too fast. i was running with friends from seven hills running shop, folks with more than a few ultras in their repertoire. for them, no big deal. for me, when those first 6-ish miles were done my thought was, "that went by way too quick. this may be cause for concern."

because that's when chuckanut really starts. up up up the fragrance lake trail to the two dollar trail. in between, a couple of aid stations, at which i topped off the tank, fuel-wise, hoping to avoid the nutrition/hydration gremlins that swarmed me the previous july.

it's probably worth noting, before we get too far into this, that rain was happening, as it had the day before. which is to say, mud was also happening. it wasn't a factor as we ascended cleator road, but right after the third aid station, entering the ridge line trail, mud got real.

(also, my brain in the thick of chuckanut.)

***********
ed. note: the chuckanut ridge line trail is fun. if your legs are under you and your proprioception is intact, you can have a blast on this technical terrain. if everything is wet and muddy you can still have fun...but now there's an element of danger going on. if this wasn't plain enough, it became clear when my feet went out from under me on a rocky drop-off. my right knee impacted first, followed by my left hand. immediately the hand went numb, and i thought i had broken something.

the self-diagnostic went something like...
"knee?"
"we're a little shaken here, sir, but still intact. we're good to go."
"wrist?"
"stand by, captain. sensors are down, we're blind as a bat."
"i don't know if you've noticed, wrist, but we're on our feet and moving. get back in the game, or tell us it's time to shut this thing down."
"stand by...fingers working, numbness fading...no breaks! we're good here!"

***********
toward the far north end of ridge line, heading down yet another steep, rocky section, a young woman was down and distressed. it was hard to tell, in passing, what the situation was, but she was crying hard and her friend was asking if anyone had a tensor bandage. to me that added up to something like a low-leg fracture, but who knows? in any case, we got word aid was heading up from the trail below, so we reluctantly pressed on.

the mud turned into soup heading south on the north lost lake trail. every uphill step included a semi-slide back. every descent was an exercise in staying upright. this routine continued around the south lost lake trail to the aid station at the base of chinscraper.*

(* steep climb gaining back all the elevation you gave up descending ridge line, over a much shorter distance. think climbing stairs in a tall building, but with mud and switchbacks and glenn tachiyama taking your photo when you've really had enough of this #%@$%# climb.)

***********
for fun, at the top of chinscraper you turn around and give back all the vertical you just fought for. down cleator, down the fragrance lake trail, down to the interurban. all that's left is the 10k back to the finish line, or as one chuckanut veteran put it, "the longest 10k of your life."

he was right. it went on forever. in some parallel universe, i'm still running it.

***********
unless you throw yourself down in a heap and refuse to continue (or suffer some other demoralizing condition), eventually even the longest 10k of your life comes to an end. considering my attitude at the start of the day, crossing the finish line felt like a bit of vindication. over what, i'm not sure. self-doubt? niggling pain? dialogue from throwback sci-fi flicks?

or maybe just the memory of a previous day that didn't go so well, and a new, more positive memory in its place.

whatever. i'll take it.

***********
i am remiss not to mention the great volunteers at every aid station on the course. their enthusiasm and encouragement was much-needed and incredibly welcome. also thanks to race director krissy moehl, who puts on one heck of a race. and finally, thanks to krissy's mom, peggy, who is a hoot. have fun at neil diamond, peggy!
Posted by spaceneedl at 9:59 PM 2 comments:

"i think a moderate 10k recovery run is pretty good after a 21-mile training run. don't you?"

"shut up! who cares what you think??"