what does this expression mean, "judas priest"?

my dad used to say it when he was angry with me, which is to say, often. but not being a church-going kind of family, i was short on context to determine exactly what he meant.

other than, "you're in trouble, mister."

now, it seems, there's a whole new "gospel according to judas" to help me figure it out. perhaps.

"It's well known that in the time of the early church, there were a number of different accounts of the life of Jesus," Bretzke said. "The church decided that some of those accounts were truly inspired by God. Those are the Gospels we have in the New Testament. Not every letter was included. So, this is another example of what we call an extracanonical account."

sidebar, your honor: who decided which accounts were "good" and which were "bad"? the church? in other words, people with extracanonical agendas? hmmm, isn't that divine...

but it doesn't answer my little query. nor is a google search particularly enlightening. lots of hits for the eponymous band, of course. and this...

Anything that is morally beyond the pale has often been ascribed by Christianity to Judas.

He is a serial murderer whose victims include his father, killed so that Judas can have sex with his mother.

'Judas the Jew', with his hooked nose and bulging purse (one of the gospels tells us Judas was the treasurer of Jesus's movement), is a stock character in medieval mystery plays and in paintings of damnation found in ancient churches.

[Or], as Monsignor Walter Brandmuller now says, Judas may just have been the victim of the longest-running miscarriage of justice ever, a potential patron saint for all those who have been libelled, imprisoned or damned unjustly.

If Jesus could forgive his betrayer, [Brandmuller] says, we should be able to follow suit with all who betray us.

yes, but if judas were merely a foil in someone's morality play, how culpable can he be? if, as it's been suggested, judas was just following orders from god, he's in the clear. right?

The Rev. Alan Jones, dean of Grace Cathedral on San Francisco's Nob Hill, believes it's always good to have another voice from the past. "There are people who are literalists who will say this proves this or that," Jones said. "To me, it proves nothing. It proves that someone wrote a manuscript. It was written more than a century after Jesus and Judas died. Why was it written, and what did the person want to say? Those are interesting questions without easy answers. Religion, like history, is untidy."

religion is untidy? that'll come as news, i bet, to bible literalists all over the world. and how, philosophically speaking, is the judas manuscript any different than the gospels that didn't end up on the cutting room floor?

and what in the name of god does this have to do with my father saying "judas priest" as prelude to a beating?

as with most things metaphysical and metaphorical: beats me. i'm sure he acted with my best intentions in mind. a variation on the judas kiss, if you will.

JUDAS PRIEST interjection by 1914. An exclamation of surprise, dismay, emphasis, etc. [a euphemism for ‘Jesus Christ’].

yeah, that seems about right.
Posted by spaceneedl at 10:40 AM No comments:

i mean, i think i may be jesus. i base this on the fact that, like the guy in the bible, i've walked on water.

sure, the water was frozen at the time, but why should that matter to the faithful?

Combining evidence of a cold snap 2,000 years ago with sophisticated mapping of the Sea of Galilee, Israeli and U.S. scientists have come up with a scientific explanation of how Jesus could have walked on water. Their answer: It was actually floating ice.

look, when it comes to OR (organized religion) i'm as skeptical as the next guy...if the next guy is charles darwin. but is the walking on water thing going be the basis upon which we decide whether jesus was, in fact, the progeny of god?

say it isn't so, jehova.

either he walked on water, or he didn't. either he was/is the alpha-omega dog, or he ain't. but if anyone makes up their mind one way or the other based on 2000 year old meteorology, they need to retake christianity 101.

was jesus a metaphysical being capable of suspending the laws of physics willy nilly? or was he simply a wise philosopher whose teachings are ignored by millions of good christians every day?

good questions. and as jesus, i would probably be expected to provide some answers. bear in mind, when i hear the word "rapture" i think deborah harry. when i hear "loaves and fishes" i think pike place market.

but don't rush to judgement.

because as god is my witness, i can walk on water any time, anywhere.*

* disclaimer: water must be frozen. global warming may affect results. see gospel of spaceneedl for details.
Posted by spaceneedl at 8:01 AM No comments: 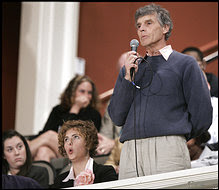 and to think i used to live in north carolina.

close enough to harry taylor's house in charlotte to drive over and give him a big ol' man-hug.

instead, i'll just add him to my list of guys i love, for his recent quiet, dignified evisceration of george bush.

Harry: You never stop talking about freedom, and I appreciate that. But while I listen to you talk about freedom, I see you assert your right to tap my telephone, to arrest me and hold me without charges, to try to preclude me from breathing clean air and drinking clean water and eating safe food. If I were a woman, you’d like to restrict my opportunity to make a choice and decision about whether I can abort a pregnancy on my own behalf. You are –

THE LIAR: I’m not your favorite guy. Go ahead. (Laughter and applause.) Go on, what’s your question?

Harry: Okay, I don’t have a question. What I wanted to say to you is that I — in my lifetime, I have never felt more ashamed of, nor more frightened by my leadership in Washington, including the presidency, by the Senate, and –

Harry: And I would hope — I feel like despite your rhetoric, that compassion and common sense have been left far behind during your administration, and I would hope from time to time that you have the humility and the grace to be ashamed of yourself inside yourself. And I also want to say I really appreciate the courtesy of allowing me to speak what I’m saying to you right now. That is part of what this country is about.

Harry: And I know that this doesn’t come welcome to most of the people in this room, but I do appreciate that.

good god, have you ever heard anything more beautiful, more poetic, in your life? you'd almost think harry taylor was kin to andy taylor, wouldn't you? same kind of pleasant, patient, implacable resolve.

it's a shame that bush couldn't offer up a coherent response. harry deserved that.

but then again, don't we all?


p.s. watch the video here.
Posted by spaceneedl at 8:05 PM No comments:

the kind of gal who can whip up a nice apple pie with one hand, while tearing out the still-beating heart of a rogue presidential administration with the other.

but no, patrick fitzgerald is just a guy--albeit the guy who's going to launch the bush administration into a frenzy of legal contortions for its grotesque, criminal, anti-american behavior.

our hero recently revealed that the administration, at the highest levels, authorized the leak of classified information, leaving a covert cia agent twisting in the wind.

remind us, patrick, what's the penalty for treason during war?

[Scooter Libby] testified that he had been "authorized" by Cheney and other White House "superiors" to disclose classified information. Of course, Libby didn't have many other superiors, besides Cheney and Bush. But this is the first time it's been directly alleged that Bush himself was involved.

while poor, hapless scooter is facing felony indictments, bush and cheney are still walking around free, spinning and disinforming like tasmanian devils. but at the end of the day, libby is just the fall guy.

Libby apparently had serious qualms about leaking classified intelligence to the press, but he was quickly persuaded to drop them. There was pressure from his boss, Vice President Dick Cheney, who advised him that the president had authorized Libby to do so. End of discussion.

That's the picture that emerges from court papers filed by the prosecutor in the CIA leak case against Libby, who is depicted as doing the bidding of President Bush and Cheney in striking back at administration critic Joseph Wilson.

i wonder how this will play with the gop base. will they give the administration yet another pass? will they agree with the ambulance-chaser general, alberto gonzales, that the president can leak whatever he wants whenever he wants?

or will they join me, appropriately, in fawning over patrick fitzgerald, cheering him on in his pursuit of truth, justice, and choking the life out of karl rove.
Posted by spaceneedl at 5:39 PM No comments:

"I'm very proud of the fact that I play golf." --tom delay, announcing he will leave congress.

tom delay is going to jail, and he knows it.

his announcement that he'll not seek re-election in november is ample evidence of this inevitability. he delivered his news sounding like al capone, another criminal who couldn't believe he got caught...

that may be. but not all sinners are elected officials who promoted slavery, prostitution and mandatory abortions in south pacific sweat shops. not all sinners redefined bribery on the delay scale, taking in so much illegal money and swag that right wing apologists had to set up spread sheets to track his alibis.

not all sinners use their ersatz christianity to tongue-kiss the rich and powerful while simultaneously bitch-slapping the poor and vulnerable.

unless he's worshipping a different christ than most christians, delay's clearly no ordinary sinner.

"I paid lawyers to investigate me as if they were prosecuting me," he said. "They found nothing. There is absolutely nothing—no connection with Jack Abramoff that is illegal, dishonest, unethical or against the House rules."

now why, if delay were so sure of his ethics and integrity, would it be necessary to go to such lengths?

doesn't matter. delay is dead. with luck, a whole lotta mo of his republican soulmates will follow in his footsteps come november.