i recall being a kid, diving to the deep end of the pool and looking around, thinking how cool it would be to just hang out down there and not have to go up for air.

eventually i granted myself that wish, and got scuba certified. the goal at the time was to head to belize to dive the world's second largest barrier reef. that trip never materialized, but many others have (belize, one day, for sure).

the highlight of the indra, a WWII-era ship turned artificial reef off the north carolina coast, is a huge barracuda that quietly patrols the wreck. i've heard no reports that this big fish has ever been aggressive...but he keeps your attention from the moment you see him until you leave the water. prolly he's bored by the multitude of divers that swarm his ship. 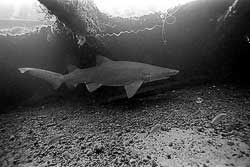 sand tiger sharks are common on carolina wrecks. once, swimming the caribsea, a spearfisher on our boat had his game bag snatched off his bcd by a 12-foot sand tiger. the shark came out of nowhere, grabbed the bag and yanked it away with a quick little twist of his head. then it turned and was gone. the whole encounter lasted less than 10 seconds...but at the time it seemed to go on forever.

the hebe, a dutch freighter, was sunk in 1942 off myrtle beach, SC. conflicting stories say it was torpedoed by a german sub, or it collided with one of its own escort ships. either way, it now sits in 110 feet of warm, crystal clear gulf stream water. the hebe is a fascinating, beautiful dive, surrounded by sealife. i don't want to call them schools of fish...they're more like swarms of clouds of schools.

the smaller fish pivot and dive and climb willy nilly, scattering bright silver light in every direction at once.

the bigger predators cruise more deliberately, showing off impossibly intense colors. further away the barracuda hover, always present, never out of mind. off the ship's starboard hull lies a field of bottles from a venezuelan brewery. 65 years ago they were litter. now they're artifacts, a couple of which sit in my office. 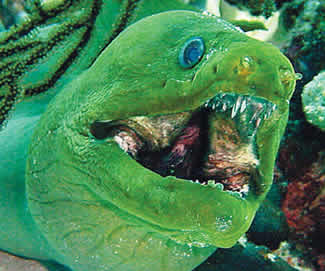 in aruba, offshore from oranjestad, is the wreck of a smallish pilot vessel inhabited by a huge moray eel. you swim around the perimeter of the boat, then up to a portal on its starboard side. the hold is open to the light above, so the eel is spotlighted in all its green, gape-jawed glory.

this july i'm getting into the water again, somewhere around maui. a night dive sounds like fun, as i've never done one and i'm kinda nervous about the idea. i'm not wild about the prospect of some creature from the depths rising out of the darkness to drag me down.

with one notable exception...

Posted by spaceneedl at 8:32 AM