there's never a chiropractor around when you need one.

i traveled to san diego earlier this week, and stayed in a very cool downtown hotel. the sign said courtyard by marriott, but it was completely unlike the sterile, cookie-cutter courtyard by marriott you'd expect. lovingly poured into an old bank building, it was one of the most unhotel-like hotels i've ever seen.

soaring ceilings, original teller windows, huge vault doors, marble everywhere...it was like walking into a time warp, back when banks projected an air of authority and respectability and responsibility instead of fabric panels and laminated teller mats and subprime loans. 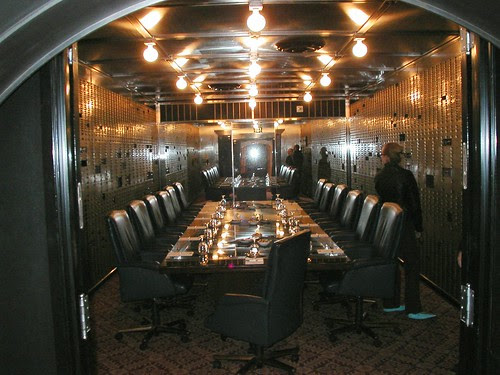 here's a meeting room set up in the former safe deposit box vault. it's memorable all by itself, never mind if the door triggered shut automatically and locked everybody in until morning. which it didn't. i'm just saying, is all.

this is all irrelevant preamble to the fact that the pillows in the bed in the unhotel screwed up my neck something awful. i don't know how, i don't know why, but sometime late monday night slash early tuesday morning, my neck and shoulders got in a twist and have stayed there ever since.

i'm too busy at work to get up and go to any kind of appointment. and sitting at a desk in front of a computer all day does not help the situation in the slightest. but do chiropractors have saturday hours? they do not.

someone told me recently that chiropractors are charlatans, or cannibals, or some such perjorative. i understand the ambivalence, as not everyone has a positive experience or outcome with chiropractic. it's worked for me in the past, however, so i'm prepared to grant the practice more latitude than some. i'd rather have my neck cranked around than, say, take pain killers and muscle relaxants that don't come in a bottle filled with fermented grape juice. if you see what i mean, and i think you do.

in the meantime, i'm going to call and set up a massage appointment somewhere. it couldn't hurt.(then again, maybe it could. and maybe that would be a good thing.) this place sounds promising: "the relaxing swedish deep-tissue day spa." the web site features smiling swedish masseuses showing off ms. olympia physiques, and smiling swedish administrative assistants filling out insurance forms and waiving deductibles. everyone goes home happy.

the very thought of it has me feeling better already.
Posted by spaceneedl at 10:11 AM