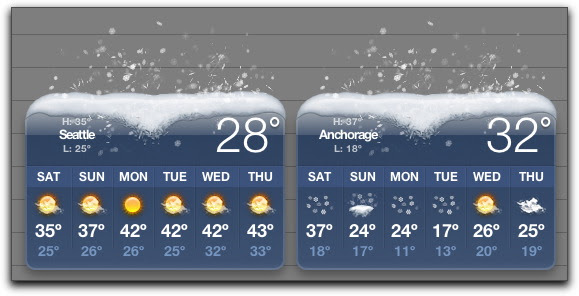 i'd like to lodge a complaint with the management.

last saturday in seattle it was 79F and sunny. summer was here, man, and it was glorious.

today, a week later, we're on our third straight day of snow.

friday i drove home from work in near white-out conditions. it was like driving west on I-70, past the eisenhower tunnel, on the way to breckenridge. in january. fresh powder everywhere, and woo-hoo, the skiing is gonna be great.

yesterday, running errands around town, more of the same. big damn flakes, and people looking like the apocalypse was upon us. or like they were experiencing an earthquake in illinois.

things like this aren't supposed to happen. or, they happen so rarely that folks say, "what the hell is this?"

today, looking out the kitchen window. more snow. what the hell is this? i want my summer back.

most years in seattle, however, summer doesn't arrive until july 5. up to and through the fireworks on july 4, you can pretty much count on cold. and rain. and cold rain. it's tradition. some places they have fireworks and bbq. we have fireworks and umbrellas. and patio heaters.

but we expect this, and we gear up for it. we alternate layers of fleece and gore-tex. we alternate alcohol and caffeine. and we count on a brilliant, warm july 5.

it's what we signed up for when we moved back to the PNW. can't pretend we didn't know what we were getting ourselves into, ex post facto-like.

but...snow. three days in a row. and more forecast for tomorrow. in april.

i wanna speak to the manager.

update: it's now late afternoon, and the sun is out. suddenly the temperature is nearly 50. what the hell is this?

update II: the storm clouds are rolling in from the west. i'm getting whiplash.
Posted by spaceneedl at 12:21 PM