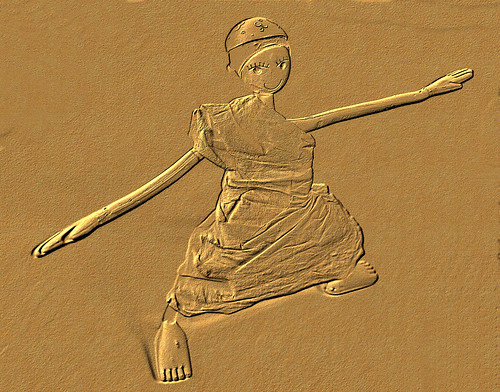 i'm as flexible as a steel bar. yes, i can bend, but it takes a long time and much effort.

which makes yoga a very good idea. for me, not for the steel, which is impervious to good ideas.

given my recent medical history, getting more flexible is more of a mandatory than an option. my meager efforts at stretching over the years have proven effective only in demonstrating my capacity for self-delusion. yes, i can touch my toes. no, i can't touch my hands behind my back. not without dislocating something.

the bad news is, i've attended two yoga classes in my life. the good news is, the second one was today. the second step in a long journey, and all that.

i was not specifically cleared by my surgeons to partake in this activity, but then again, they didn't say i shouldn't. what could possibly go wrong? yoga is as wholesome and holistic as exercise gets, isn't it?

i know what some of you are thinking. there's a perception out there that yoga is an unmanly pursuit, unsuitable for manly men. "go lift some weights, eat some steak, and drink some bud," you scoff.

and, you'd be wrong. you try doing some of these moves, without lots of padding. and a spotter. and a paramedic.

yoga is hard work. the entire class i was sweating and shaking and tipping over--often at the same time. good thing i'm not self-conscious about such things, or i might've had to rush out of the studio for an immediate ego-ectomy. i was saved from that by a newfound state of blissful self-unawareness, in which i'm conscious of the pain, but not how ridiculous i look. this has been a necessary adaptation in my rehab, and it has come in handy more often than i would've previously admitted.

the people who are good at this sort of thing are amazing to watch. anyone who can do this without needing emergency surgery must be in pretty good shape. for lots of things. who wouldn't want to emulate that?

and we haven't even mentioned the philosophical and spiritual benefits of the practice, which are many and ancient and ostensibly wise. i could use some more wisdom, ancient or otherwise, if that weren't already painfully obvious. trouble is, i'm not sure if i have time for the philosophical-meditation thing. it might cut into my crazed running about like a headless chicken, after all.

update: two days post-yoga, i'm sore all over. shoulders to hamstrings to feet. which theoretically means i did something right, workout-wise. i'm not sure that assessment synchs up spiritually. in fact, and i'm just guessing here, i'd say it doesn't. probably it means that in typical american haste and taste for excess, i overdid it.

so much to learn. so little aptitude for it. time for some stretching.
Posted by spaceneedl at 10:55 AM

i'm not sure that assessment synchs up spiritually.

mr. needl, this is pretty much boilerplate yoga advice, but remember to practice ahimsa (Sanskrit for "do no harm") as you practice yoga. If you are "sore all over" I suspect that you pushed yourself farther than you needed to.

In each pose, stretch to the straining point and back it off a notch. As you continue your practice, you'll find that you can gradually go deeper and deeper into poses, but you won't be able to progress much if you injure yourself.

i figured. the instructor in this class is a friend, and a high-achiever. she sets the bar very high.