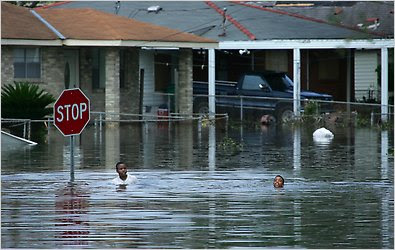 and he thinks, "i can make a pile of money off of those corpses."

the bodies in question would be those of the people of new orleans who died of an acute case of ineptitude inflicted by brown and the bush administration.

those facts are not in dispute, so we'll not relitigate them here. more currently, however, brown is attempting to rewrite history, returning to new orleans to broadcast his radio show and to pimp his upcoming book.

as the head of a major government agency designed to help in times of emergency, it seems a shame that he didn't show up in a meaningful way when it might've made a difference. but brown takes no responsibility for any of it, including the part where he was completely unqualified to hold that position in the first place.

by brown's own description, his book will attempt to deflect blame for a delayed and pitifully inadequate FEMA response; to deny mismanaging the resources that were available; to bury the formaldehyde-laced trailers sent to house the thousands of homeless. and typically, to blame government for the corruption of an administration that raised haplessness to an art form...
"Whatever your persuasion is, we have to recognize is that this federal government of the United States is so large and cumbersome that we really can’t and should not expect it to be this kind of well-oiled, well-running machine. It’s not."

of course it's not. especially when it's peopled with grotesque incompetents who live to prove how useless government can be. note to those who like democracy: never vote for people who brag about how much they hate our government.

sidebar: remember this one? "no one could've predicted the failure of the levees"? yeah, that was a lie, too.

even with the benefit of five years' reflection, brownie insists the real problem in katrina's aftermath was not a failed response, but rather, bad PR.

Brown said one of his regrets is not being more straightforward with the public. "Even though we told the facts, we didn't tell it in the right context," Brown said. "We should have said, 'This is what we are doing, but its taking longer ... than we expected it to."

funny how everything takes longer when you have no idea what you're doing.

but that no longer matters. five years is forever ago in a country that can't remember what happened last week, let alone during the last administration. and hey, history notwithstanding, life's all good in brownie world...

"I'm on the number-one station in Denver, I have one book that's in print now, a second book that I'm starting to work on already, I still speak around the world, I have clients around the country, I have a company here in Denver, I have two grandkids. What's the problem?"
Posted by spaceneedl at 2:59 PM