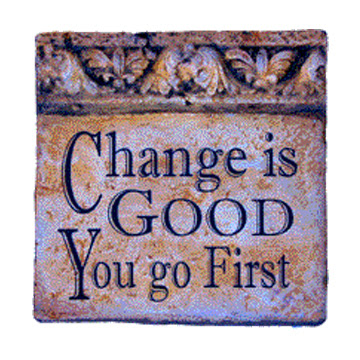 it may take years to recognize it as such, exacting a shocking toll along the way, and leaving people looking like they've peered through the very gates of hell.

we're such silly creatures of habit. we love our routines, and we fight like honey badgers to preserve them. even when they're not particularly good for us.

we drink, we smoke, we send ill-advised photos of ourselves on the internet. not because it's smart (hi, congressman weiner!), but because we derive comfort and a false sense of control from the rituals.

and since the entire world is out of our control, sometimes we get a little nutty trying to establish order in our little corner of it. we call it "being organized," or "keeping a schedule," or "obsessive-compulsive disorder."

if we stray from our morning rituals, for example, bad things happen. we lose our car keys. or neglect to put on our makeup. or forget to drink our morning coffee, causing an extreme bout of lethargy, headache, and irritability, also known as caffeine withdrawl. and throughout the day we think maybe we're coming down with the flu or having a stroke or experiencing demonic possession.

and just as we're about to slog home, hoping not to fall into a catatonic state on the way, we remember, "no coffee today! have i lost my mind? no wonder i've felt like such utter crap for the last ten hours!"

file that under, "change is not easy, but it will help you view life in inaccurate and drama queenish ways."

when we're young, we slip in and out of routines like jeans that actually fit without saying "loose fit" on the tag. change is no big deal, because our brains are still adept at processing new information without insisting it conform to our world view. we see gays getting married and we say, "cool, people should be able to marry the person they love." and we know this is true in the same way we know the universe is continuously evolving, sliding into and out of itself, vibrating with a constant thrum of cosmic ethereal rhythmic velvet. it just is.

when we get older, however, routines become habits, and habits become health risks. our ability to dodge conventional wisdom loses a step, then two, and the next thing you know we're doing a slow, insensate waltz in the cold, rigid arms of dogma. we hear people say, "healthcare is bad," and we say, "yes, healthcare is bad, we should keep it from as many people as possible." we know this is untrue, because it feels false and contrary to every impulse we know, and yet we find ourselves locked into it without really understanding why.

file that under, "change is good because it keeps you dancing fast."

metamorphosis is inevitable. the really smart ones among us constantly reinvent themselves to stay ahead of it, surfing on the aeonian waves. the rest of us typically stand there in the surf, sometimes rising up with the surge, sometimes getting slammed into the sand.

if we're resilient (according to the japanese proverb), we get knocked down seven times and get up eight.

if not, well then we're seaweed.

file that under, "never turn your back on the ocean."
Posted by spaceneedl at 5:25 PM