truth is a maverick, and other foibles 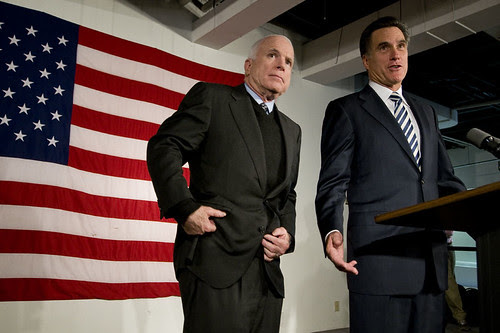 “You can’t hide from your record of making this country bankrupt, from destroying our national security and making this nation one that we have to restore with Mitt Romney as president of the United States of America!” ~~john mccain

i don't know why i let this kind of thing bother me. i really don't.

it's because i was taught early in life to tell the truth. or risk a swift beating. it's not the best rationale for truth-telling, but it stuck with me.

a couple decades ago, john mccain seemed to have a stubborn streak of the truth-telling in him. while his colleagues on the right were busy defining down the concept of "facts" and "reality," mccain would get all contrary and say something like, "no, that's not right, and i'm not going along with it."

that's not a direct quote. but it does capture the essential mccainness that earned him the "maverick" moniker among his admirers.

compare that with today's mccain, who has sold his soul to the loony-fringey sarah palins of the world. to the point he will blame barack obama for bankrupting the country, destroying our national security, and oh-i-don't-know, cooking up endangered species in the white house kitchen.

as if everyone wasn't painfully aware george w. bush did all of it first, and far more efficiently. with a monkey grin on his face.

the fact that mccain has endorsed a candidate who would take us back to the glory that was the bush years perfectly illustrates how the old maverick is now not much more than an old barn horse ambling from fence to fence, hoping someone will feed him a carrot.

mccain used to be someone whom you could admire, sort of, if you overlooked his cognitively dissonant politics and the fact he was a lousy pilot.

one day, though, it seemed like senator maverick woke up believing the hype. overnight, probably during the 2008 presidential election, he jumped his own shark into the land of self-parody. from that moment on he's been kind of a sad charicature, an unfunny punchline who doesn't get the joke.

the lesson here is that it doesn't take much, or long, to fall from prominence and relevance to absurdity and bewilderment. this is especially true if you walk away from the qualities of character that made you interesting in the first place.

mccain's vanished integrity (and empty ranting) really isn't worth a moment's dudgeon. it shouldn't bother me in the slightest.

but for some reason, it does.
Posted by spaceneedl at 4:41 PM

It is troublesome and speaks volumes about the desperation among republicans to find a candidate. I would be surprised if Romney doesn't get the nomination, but then again stranger things have happened. Santorum is truly scary - he wants to start cutting social security pronto - not such a good idea for a whole host of reasons. Given the sorry slate of wannabes we have to make sure that O gets re-elected!

agreed. and to your earlier point about huntsman...it speaks volumes about the current gop that the most sane, reasonable, and statesmanlike among them has no chance of being nominated.

Truth doesn't matter much, most recently evident yesterday, as Mitt Romney won the New Hampshire primary despite having been slammed with truth about his past for weeks prior.

i listened to little mitt's nh victory speech, and it made my blood boil...ever so slightly. he is an accomplished liar. and so completely transparent.