"There is a corner in every human heart made to be filled with hatred, fear, and violence. It is our common curse, and when we feed that space, it grows larger, stronger, and more vicious. Whoever you are, wherever you are from, whatever you believe, that corner exists within you. You know it because you have filled it, in one way or another, at one time or another, because it is there, and because you are human.

"The great challenge of our common humanity, and of every individual, is to make a void of that space as best we can."

and our collective survival instinct demands that we pay attention to it, so we learn to avoid it. trouble is, fed too much attention, the bad can take on a grim, feral life of its own. it's a wild, dark energy that can turn on you and eat you alive.

this is true...and yet somehow the world is not, always or entirely, a carnivorous beast. we know this because sometimes ~ in quiet moments between the relentless waves pounding our souls ~ sometimes awesome happens.

"It's incredible. You're just trying to live an honest, genuine life and the next thing you know you have the president calling you." ~ jason collins, nba player and oh-by-the-way gay nba player

by now everyone knows why jason collins coming out is important and game-changing and perspective-altering, right? it's this: sports is the official religion of america. we worship teams and athletes and coaches far more piously than we do the guy for whom christianity is named. so when the first active player in the history of footballbaseballbasketballhockey stands up in america's church and says, "hi, i'm gay," it's a very big deal to tens of millions of parishioners who suddenly have something extra to meditate on.

it becomes a bigger deal when fellow players, star players even, look over at jason collins (and other gay players who will inevitably follow his lead), nod their heads and say, "okay, that's cool."  their example, writ large and loud enough for even the most knurled of knuckleheads to grasp, will make it more okay to be gay and less okay to subject LGBT people to discrimination, hostility, and violence.

it makes it easier for states like minnesota to join the growing number of states (plus washington, d.c.) officially making marriage equality the law of the land.


"What a day for Minnesota," Gov. Mark Dayton told spectators at the signing ceremony on the steps of the State House in St. Paul. "What a difference a year and an election can make in our state."

continuing on this path...if you lean more toward the life-affirming and less toward the constant death-fetishizing in the "news," you might enjoy this:

On March 11 2005, Kevin Berthia wanted to end his life. He climbed over the railing of the Golden Gate Bridge and was preparing to jump into San Francisco Bay when he heard a voice calling out to him from above. 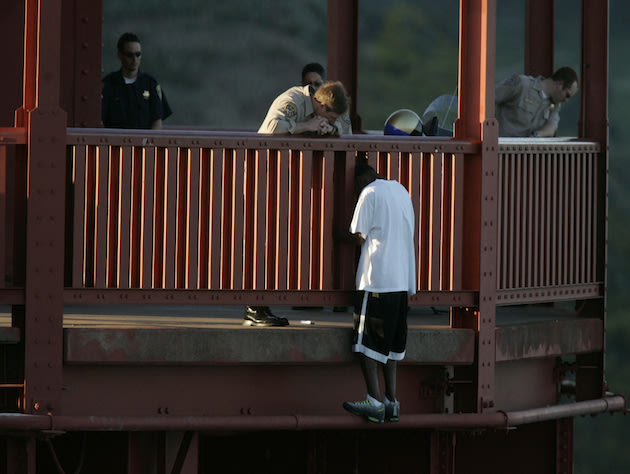 It wasn’t the voice of a spiritual presence, but that of California Highway Patrol Officer Kevin Briggs. The two talked for an hour before Berthia decided to climb back onto the bridge deck and give life another chance.
Eight years later, the pair reunited in an emotional ceremony honoring Briggs and other members of the CHP whose job is to persuade suicidal men and women from jumping off the bridge.
Much of the attention at the event was on Berthia and his courage to speak about his experience. But after his introduction, it was Briggs who found himself overcome with emotion, needing to lean on the young man whose life he had helped save.

breathe that in. refreshing, isn't it? it's enough, maybe, to keep one from jumping out of bed and immediately into the fetid puddle of despair and disappointment the corporate media peddles as tragedy-porn infoganda news.

as the final bright spot du jour, we present this guy: the rev. dr. roger ray, pastor at the community christian church in springfield, mo. full disclosure: i don't care much for the jesus fan clubs that demonstrate daily they have no idea who jesus was or what he was about. but no matter who or what or if you worship, you will see that dr. ray gets it. i'm not a church guy...but i would spend time in this church.

"I've spent two decades speaking in college classrooms, church basements, from pulpits trying to explain why biblically, psychologically, philosophically, medically, socially, that we should not continue to be prejudiced against gay people and be willing to celebrate same-sex relationships with the same joy and respect that we afford to heterosexual relationships. But I'm no longer willing to pretend that there's anyone left on Earth who needs more time or more information to process that fact.

"We don't have to pretend that ignorant prejudice is not ignorant prejudice. We don't have to act like it's okay. It is no longer our responsibility to explain to conservatives why we're not prejudiced against gay people. It's up to them to explain to us why they think they should be able to preserve that prejudice." ~ rev. dr. roger ray
bad happens. but as dr. ray demonstrates, we don't have to surrender to it or wear it around like concrete sackcloth. responding to random calamity is a test we take every day. (hmm, make it worse or make it better? make it worse or make it better? what to do, what to do.) and every time we quietly get up, brush ourselves off, and get busy living ~ we pass.


on my feet and moving.
Posted by spaceneedl at 9:59 AM

A great reminder of the need to consciously ration the attention we spend on the dark side.

I've got a draft post I'm working on related to what I'm called a dystopia fetish, and I believe it's related to your post somehow.

Thanks for the inspiration.

thanks, how. glad you liked it. looking forward to reading your post.

I believe that's your best post ever, Michael. Well done. I'm passing it along.

Pure goodness from one of my most favorite good guys.