"growing up i always thought quicksand was going to be a much bigger problem than it turned out to be."

many of which capable of dragging down the unwary and the unlucky.

tromping through treacherous terrain, fortune favors those who travel with a vine.

if only i were as fast as the manner in which 2014 has flown by.

uh, i'd be pretty damn fast.

as a general matter, though, i don't need any more "fast" in my life. i need some slow. i need our little corner of the world to step back, take a deep breath, and hold on a minute while i absorb and process. somehow i don't see that happening.

scientific observation suggests that 2014 went by faster than any year in recorded history. not really. i can't back that up. still...fast.

because the year went by the way it did...i didn't run as much as i intended to. my goal was 1,500 miles. but even as i was typing it out, one year ago, i knew it was a stretch. sure enough, with a few december days remaining, i'll be very fortunate to hit 1,200.

c'est la vie. on the upside, i did reach the rest of my very-modest running-related goals.

as was the case last year, i saw some spectacular sights in 2014, things i would never have seen if not for the running. i roamed around some of the most scenic islands our little planet has to offer (oahu, whidbey, fidalgo, and orcas). i ran past saguaro in arizona, and bougainvillea in lanikai. i reveled in the beauty of washington state parklands from bellingham to the issaquah alps to the methow valley.

on the downside, i also went through a months-long slump where running felt like a slog. my energy was low and my legs just felt kind of...blah. physical? mental? i don't know...but i do know it didn't keep me from buying more running shoes (thanks, seven hills running!). either way, with the daytime hours finally heading back into the light...the doldrums have lifted. i'm enjoying running again, i feel much stronger, and i'm looking forward to kicking things up a notch in 2015. 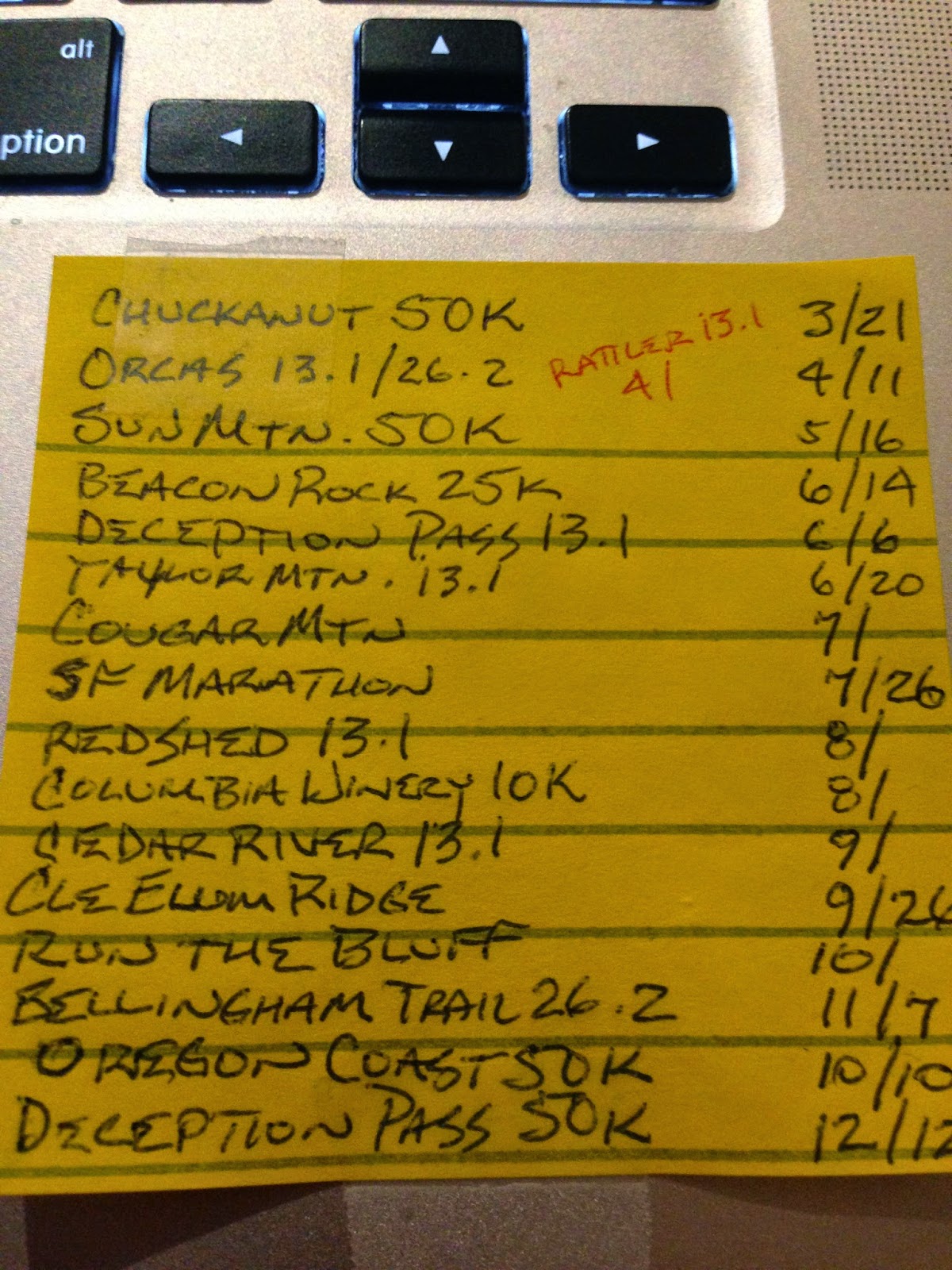 if i can check off a few of those in the coming months, it'll be a very good year. more specific goal: four events of 26.2 or longer. twice as many as in 2014.

i have much work to do.

***********
full disclosure: in the back of my mind the idea of a 50-mile event has begun percolating. i believe i have it in me to handle the distance...but i'm completely unclear how my life would allow me to prepare for it.

still, it's there. persistent. and percolating.

***********
related contextual note: watch a few of these gorgeous videos from project talaria and see why the pacific northwest is the best place on the planet. for running. and other things. really.

***********
there are many other topics suitable (or more suitable) for a year-end post. i've written much in the last 12 months, for example, about gun violence. and injustice in our "nation of laws." and homelessness.

i've spoken to him many times. his name is darryl, and he's a quiet, pleasant man. living under a bridge. a hundred steps away.

it's winter, and it's cold at night, so i worry about him. i take him fleece blankets and sweaters and gloves and food. i think he loses these things over time, so i take him more. we chat, and it occurs to me that he's probably wrestling with a degree of mental illness. occasionally he mentions he'll only be in seattle for a while, until the government gets him a new body.

then we change the subject. i ask him if he needs anything. "a couple bucks," he sometimes says. i give him whatever i have in my pocket, tell him to stay warm, and that i'll see him soon. he shakes my hand, and says thank you. he always says thank you.

i mention this only because it's quicksand, and i'm unprepared, and i don't know what else to do.

as noted above, quicksand takes many forms. and to one degree or another, we're all in it.

Eloquent, gracious and determined as ever! Watch out 2015, MCM is coming for you.

Now for that 50 miler.... will have to bend your ear a little at the next few group runs. I've already gotten a merry band of folks roped into White River this year.