Something we have to do 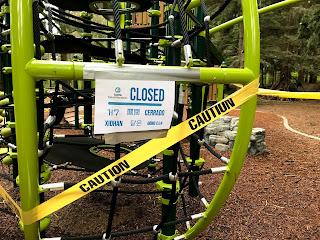 
Paul Simon—American Tune
***
I remember walking into the office on Nov. 9, 2016. The first person I saw was barely holding it together in her cube, so I stopped to say something encouraging.

And...I couldn't think of a thing worth saying.

So we we just hugged, and she started sobbing. I felt like doing the same.

In those few seconds, I had a moment of lucidity. "The world is going to need a lot of brave people now. You can do that. We can do that."

After a while longer we both took a deep breath and went about our day.
***
Three and a half years later, there have been too many days like that. Too many instances of contempt and disbelief and disgust. And that was before the start of the pandemic now immolating most of the world.

Globally (but most egregiously in the US), the disease has been like a wildfire that's zero percent contained because the firefighters can't see the flames. Why "most egregiously"? Because the person who's nominally in charge of the US response spews gasoline everywhere, every day.
***
The sense of loss is pervasive. Some are small and inconsequential. Others are overwhelming and permanent. But they're all valid, and cumulative, and exhausting.

It's taken a toll on some of the strongest people I know. I hear from friends and acquaintances that it's now normal to sob and then laugh out loud in the space of a couple minutes. To shake from despair and then low-key rage.

Some people will be at their best during the next few weeks, as the crisis builds to a peak. Many will be at their worst. Every day will present new opportunities for us to decide which we'll be.

We owe it to them, and to each other, to do the best we can in the moment. To help when we're able, and to keep moving forward.

Take a deep breath, friend. This is just...something we have to do now.
Posted by spaceneedl at 8:48 AM