After The Before Times 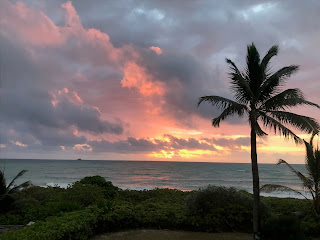 Prior to March, 2020, my wife and I schemed furiously and nefariously about moving to the Big Island and starting a farm.

Nothing too ambitious—five or ten acres planted with whatever we felt like growing in the island's near-perfect conditions.

There would be a couple dozen chickens, surely, and some goats. A few bee hives, a handful of rescue dogs and barn cats and maybe a pig.

And the views. Always the views. Across the water to Maui, mauka to Mauna Kea. Sunsets that would make us stop whatever we were doing and just...watch. And listen. And maybe remember what it was like, a long time ago, when "getting out of our own heads" was a steady state rather than a wistful, fleeting goal.

As a side-hustle, I thought about starting up a little running company. Again, nothing too elaborate. Maybe three or four gatherings a year, in a place that quietly beckons you to come outside and be warm and move through tropical air at an enjoyable pace.

Mostly, though, our life would sway to the daily rhythm of the farm. Chatting with the chickens while collecting eggs. Harvesting fruit and veggies for the farmers market. Fretting over the health of the bees. Posting silly goat videos, running up and down hills with the dogs, marveling at what intelligent creatures pigs are.

In addition to the day's chores there would be projects. A greenhouse to set up, perhaps, or a new coop to build, or the scratchy clearing of non-native plants to make way for honeybee-friendly seedlings. There would be seasonal life to celebrate, inevitable deaths to mourn, followed by new creatures to welcome into our hearts. And so it would go.

We didn't expect the journey from here to Hawi to be a straight line...we just didn't expect the line to be so volatile and aberrant and fraught. Like an injured bird willing itself up on one good wing, then hitting the ground in panicked confusion.

We still have plans, of course. They vary with the day, rising, falling, changing direction, pausing to get their bearings before trying again. 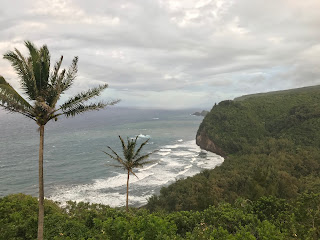 As always, there's much to do in the here and now. Hens to cajole, bees to wrangle, cats and dogs to referee, and on and on.

We're grateful for what we have, and grieve for what's been lost. We're stolid about today, and anxious about tomorrow.

We wait for a reprieve from the insane, the impetuous, the inexplicable.

And in rare, quiet moments (quite often on a run), we stop what we're doing and think about the views.

Posted by spaceneedl at 3:14 PM