the quantum mechanics of time and memory 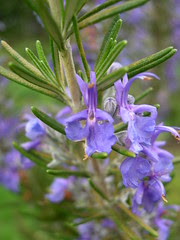 the night before we left for arizona, i dreamed about joan.

we chatted about nothing i can remember, but when i woke up it felt like i had just seen her, heard her voice, given her a long-deferred bear hug.

when we got to her house, several hours later, she wasn't there.

i mean, of course she wasn't there, she's been gone nearly two years. but last time we visited, she was everywhere. you couldn't open a kitchen cabinet or walk around the back yard without her next to you.

this time, though, it seemed she had moved on.

she wasn't at the door to greet us. the rosemary that once lined the east side of the patio was in full retreat. her kitchen, a model of manic efficiency, was simply clean and quiescent.

my father-in-law, so fragile during our last trip, has found his equilibrium. he doesn't live in nearly as much of the house as she did, but he uses as much of it as suits him. the rosemary may be in disarray, but the pool is crystal clear and inviting. he's not sure what's in the spice cabinet, but he knows his way around four grocery stores.

early one morning we hiked through dreamy draw recreation area, one of joan's favorite desert spots. the air was cool and calm, the saguaros were blooming, the songbirds were doing what they do. my daughter, wearing one of joan's baseball caps, was an intrepid hiker. she kept up the pace, kept her eyes open for wildlife, and kept her composure when we startled a rattlesnake right in front of us. fearless, the girl backed away, hopped down a little rock wall, and made her way around the beast.

i didn't think much about it at the time, because the girl is an audacious little character. even so, in retrospect her poise was remarkable.

in my dream, joan was as real and immediate a presence as ever. i could hear her voice, smell her shampoo, feel her wiry strength. for that i'm grateful, because that same presence, which i fully expected to encounter in arizona, was missing.

except, perhaps, for a moment on a desert trail, when her granddaughter would've made her proud.
Posted by spaceneedl at 7:42 AM

My wife has a phobia for snakes. We bought dog food at the local pet store to find the clerk ringing us up with the help of some non-venomous serpert. Ashley dropped the food and screamed out the front door. God knows what she would have done is she'd been in a.g.'s shoes.

Let her know that I'm proud of her too and that I miss her and her brother.

i think you would be amazed at the girl's unflappability. the other day she was walking through the kitchen and stubbed her toe on something.

instead of pitching a fit, she said, "ow, hurts," and kept on walking out the room.

it was hilarious, in a quiet sort of way, and typical of her demeanor.

she surprises me every day.