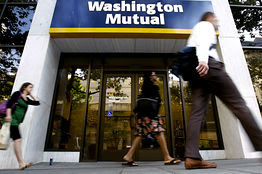 it's been seized by federal regulators.

it's the largest bank failure in u.s. history.

it's based here in seattle.

i bet a bunch of boats go up for sale soon, whatta ya think?

as noted previously, i've been plotting to acquire a boat. it's cheaper than a vacation home, it has great family memories potential, and it always has a water view.

in the last few days, however, it's not seemed like such a great idea. the economy is collapsing around us, we're told, and who knows if we'll be able to pay our many bills this winter -- let alone pay for a vulgar extravagance.

sounds good in the abstract, don't it?

trouble is, the spaceneedls aren't among the haves and the have-mores. we are working-class fools. we are, of necessity, a two-income family. if things go sideways, we go south. figuratively, and maybe literally. grandpa don lives in phoenix, after all. maybe he'd take us in.

i'm overreacting, surely. as of today, the missus and i remain employed, in a field that should be less volatile than some. we try to spend less than we bring in. usually.

we try to value things that don't have a price tag attached to them.

there's not much need for boats in phoenix.

(besides, with credit tightening and banks going under...who'd float us a loan?)
Posted by spaceneedl at 10:08 PM

Of course, if you got that boat ... the spaceneedls would have a vacation spot when the rest of us have squat.

Maybe you'll invite the rest of us poor souls over for champagne cocktails on the lido deck.