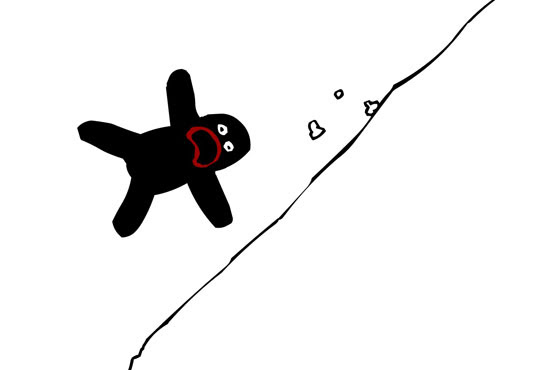 the little epiphanies keep rolling in.

today, for example, i was afraid of a dog for the first time in my life.

kate and i were out for a walk, and a big black pit bull mix, sans owner, came charging across a busy street at us.

before june 24, i would've been fairly confident that if things went sideways, i would be able to defend kate, and myself, from any dog. it may have been a false confidence, but still, i wouldn't have been afraid, which is important in a canine confrontation.

now, given the state of my neck and knee, i'm fairly confident kate and i would've been flayed and filleted had this dog decided to have a go at us. fortunately a passer-by (who happened to work at the local animal shelter) intervened just when i thought things were going to get ugly.

we put as much distance between us and them as quickly as i could manage it, and it hit me that this fear thing is going to take some getting used to. i know this is true, because i can't ever recall struggling to keep from sobbing in public the way i had to at that moment.

later, a friend of mine observed, "now you know what it's like to be a woman -- every day."

well, no, i don't know what that's like. but i am gaining a new appreciation for feeling unexpectedly vulnerable. and for dealing with physical and emotional challenges that would've been no challenge at all just a few weeks ago.

walking with a dog used to be as easy as breathing. now i literally have to think about every step -- making sure the right leg is tracking straight, that i'm extra-cautious on a downhill slope, and that the dog isn't pulling me into a misstep. it takes a long time to cover ground that previously passed underfoot in no time at all.

yesterday morning avery and i took part in international walk to school day. at one point the walking school bus route took us down a semi-steep, gravel trail. nobody else had a bit of trouble negotiating the hill, but i slipped. my right leg went out from under me, and i was thisclose to a swift collision with the ground.

that would've been bad -- falling now is not like falling when i was a kid. i was able, barely, to regain my balance, but tweaked the knee in the process. that didn't hurt nearly as much as being the awkward old guy who nearly wiped himself out in front of his daughter. "geez, daddy, walk much?" (no, she didn't really say that, i just thought it. which was worse.)

my whole life i've been the guy people ask for help. "can you lift this heavy thing up several flights of stairs, please? thanks." sure, no problem.

now it's a problem. not only can't i help them, i can't even help myself. i'm in a state of unease and imbalance that doesn't suit me. at all.

these days, most falls have consequences.

my fall from the grace of careless confidence continues.
Posted by spaceneedl at 11:10 AM