you can ride that train 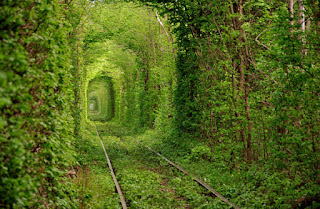 to the far end of creation
away from everything
and everyone you know
you better make friends
with your angels and your demons
they will be riding with you
wherever you may go
ah, but you have to go

"train in the distance" ~ don henley
***********
seemingly overnight in discovery park the space between winter-gray branches filled with green.

running on some of the park's most obscure trails, glimpses of water and mountains disappeared, replaced by verdant, variegated walls.

this development coincided with the long-awaited arrival of the gorge waterfalls 100k, which months ago somebody signed me up to run. lots of miles unfurled in the park (and elsewhere) since that october day. through the wettest winter in seattle history, in dusky daylight and nights barely illuminated by headlamp.

i understand why many people would call this "no fun at all." or, "crazy." or, "dangerous." (hi, mom and dad!) not long ago, i felt exactly the same way. but something happened...i can't explain the metamorphosis to myself, let alone someone else. but, change happens...those dark, wet, muddy miles were some of the best times of my life, spent with some of my favorite people.

and they led to a starting line that once was hilariously beyond my reach.
***********
i took thursday-before-race-day off from work so i could properly obsess over race prep. sorting through gear, packing drop bags, deciding on shoes and socks and shirts and shorts...it went on far longer than it should have, given that running is supposed to be a simple activity.

friday morning we stuffed the car with a week's worth of provisions for the 2.5-day stay in troutdale, oregon. which is not far from benson state park, the starting point of the 2016 #gw100k.

friday evening, runners, family, and friends gathered to chatter about the next day, to eat a lot, drink a little, and sleep even less.

saturday at 4 a.m. the alarm went off.
***********
"unique and valuable life experiences are out there on the trails during these long, long runs." ~ matt urbanski

and now i know what 100k feels like. it hurts. this race hurt my body and hurt my pride. along the way, my GI tract revolted and my brain mutinied. and while i had some very good moments during this very long day, there were also lots of lows. henceforth to be known as "attitude management issues."

the good news: the first half of the race went great! i had fun, felt good, enjoyed the scenery, and had a blast greeting all the people i knew on the course.
the bad news: from the halfway point on, my stomach went sideways. it was a constant question whether i'd be able to keep down what little food and liquid i forced in. forward progress often slowed to power-hike speed, and from mile 42 to mile 56 my brain spent a lot of time and energy coming up with reasons to drop.
the good news: none of them stuck. 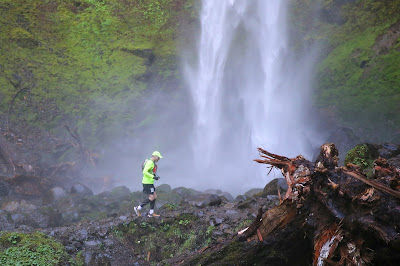 when i got to the yeon aid station (mile 49.3), my friends scott hodukavich, tracy brown, and luke notman were there crewing for dana notman, scrambling to get her on her way.

with her squared away, they surrounded me, pushed food and hydration options at me, asked if i wanted to sit, how i felt, what i needed. i didn't know the answers to any of their questions, but i scanned the table for anything that looked remotely palatable. eventually i grabbed a section of bagel and cream cheese...and some oreos. next thing i knew, scott and tracy were escorting me down the hill and away from the aid station.

in the commotion, i temporarily forgot about dropping.

not long after, dana caught up with me, chatted cheerily for a while, then trotted off. couldn't blame her, i was moving sloooowly.

from about mile 51 to mile 56 daylight faded into night, and mentally i dropped many more times. rolling into the no-name aid station at mile 56.6 i was, once again, prepared to call it.

until i saw dana, that is, getting ready to head out. she said something encouraging ("michael's here!!!" i think it was, which was sort of true), prompting me to reflexively refill my bottles and head out with her.

we left no-name at 8:45 p.m., giving us 2 hours and 15 minutes to cover 6-plus miles and beat the 11 p.m. cutoff. in between was a two-mile,1500-foot climb, followed by a precipitous descent to multnomah falls and the finish.

we started climbing at about 9:20. several minutes in, i remember being glad it was dark; it kept me focused on the few steps i could see directly in front of me. this was important because the climb was very steep and required my full attention lest i collapse and roll back down the hill.

we counted the switchbacks, which some sadist thought would be funny to commemorate with signposts. "2 of 11" said the first one i saw. it took a long time, it seemed, to get to "3 of 11".

at 9:49 p.m. we passed a sign that said "historic columbia river highway 1.9," which roughly coincided with the end of the climbing.

down the switchbacks we went, like barn horses hurrying back to the stable. i was able to run most of it, which means the bagel and oreos must've kicked in somewhere along the way.

past multnomah lodge and multnomah falls and the helpful volunteer directing us thataway. "it's less than a mile to go."

we beat the cutoff by 20 minutes.
***********
you better make friends
with your angels and your demons
they will be riding with you
wherever you may go...

postgame: my better angels were conspicuously silent during the many miles that my inner demons would not. shut. up. so i can't say i made friends with any of them at #gw100k. but, at the very least, i WILL recognize them next time out.

yes, there will be a next time.

"the fears we don't face become our limits." ~ robin sharma 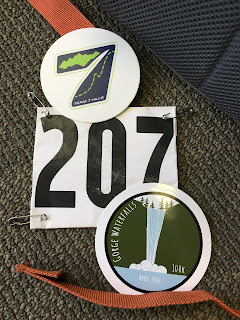 song stuck in my head for way too many miles: "delirious" ~ prince

***********
thank you, good people of rainshadow running, for handing me a beatdown on such a spectacular course. i will never forget the...uh...parts i can remember.

thank you, friends at and from and through seven hills running shop. you already know your place in my heart. always.***********
final note: it's worth mentioning that in finishing this race, i qualified for the lottery for the western states 100-mile run.

every year, thousands of tickets go into the lottery ~ but only 270 get punched. in 2015, "the probability of being selected with a single name in the hat was 4.7%."

so, while i'm not holding my breath regarding this once-in-a-lifetime opportunity...i am saying there's a chance.
Posted by spaceneedl at 11:35 AM

spaceneedl
So, we moved to an island...