"Who are those guys?" (a Yakima Skyline Rim 25K race report)


"Boy, you know every time I see Hole-in-the-Wall again, it's like seeing it fresh for the first time. And every time that happens, I keep asking myself the same question: how could I be so damn stupid to keep coming back here?"

~ Paul Newman in 'Butch Cassidy and the Sundance Kid'
***********
I had never been there before, but there was something familiar about the setting for the Yakima Skyline Rim 25K.

The high cliffs overlooking the river, the trains across the water from our campground, a relentless pursuit over rocky crags, leading inexorably to a desperate leap...

What could it be?

It doesn't seduce you with the buttery, forested single track typical of the Pacific Northwest.

Rather, it hits you in the ribs with two hulking climbs and descents, linked together by a rocky, technical ridge line. It lays it all out in front of you without acrimony and says, "This is what I have...what do you have?"

Well, I'll tell you what I have, YSR course—I have two very ruined big toenails, thank you very little—both wrecked on your freakish descents. I'll think of you when I'm limping around the Marin headlands in a couple of weeks.

That said, I also have a bit more confidence heading into Miwok 100k, since the biggest ups and downs on that course don't compare to a Sunday on the trails in the Yakima River Canyon.
***********

The first climb at YSR is about two and a half miles long, with grades of up to 45%. Along the way are four or five false summits that might make the climb seem less than it is.

But they don't. It still seems like one of the toughest uphills I've encountered on any race course, including Squamish and Backcountry Rise.

And that was before I got to the second climb. 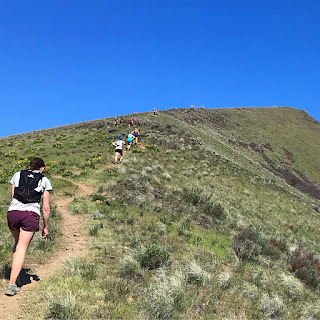 About four and a half miles long, at the back half of the course, this ascent indifferently stares you in the face nearly the entire time. Looking up at it was visually intimidating, if I'm honest, so I just kept my head down and focused on the next several steps in front of me.

This worked out better than curling up in a ball and rolling back down the hill.

Framed by the climbs on both sides, the in-between trail along the ridge line is no stroll in the park. The terrain is fraught with semi-treacherous rocks most of the way—but it is a welcome, mostly runnable break from the ascents.

A guy with a healthy appreciation for not being broken into unfixable pieces.

So the last descent took a while. And it hurt my toes.

The last three-quarters of a mile at YSR takes you back over the seasickness-inducing pedestrian bridge you crossed earlier in the day, across some pavement, up a little rise, and before you know it, viola! You're high-fiving RD James Varner and dunking your feet in the icy-cold Yakima River.

Denouement: nope, that's it. Like the course, there was no dramatic plot twist, no ambush in a Bolivian village.

I think I'll keep coming back here.
***********
Many thanks to the cast and crew at Rainshadow Running for a reliably rollicking good time. Even more thank-yous to the volunteers, who really don't have to be out there on a random-if-beautiful Sunday (let alone Easter Sunday), but are out there dispensing joy, nonetheless.
***********
"Kid, next time I say, 'Let's go somewhere like Bolivia,' let's GO somewhere like Bolivia."
~ Butch Cassidy

Song stuck in my head the entire time:
"Panama" ~ Van Halen
Posted by spaceneedl at 8:40 AM