brian goldner gets paid a lot of money to market molded plastic to kids, but cannot possibly have any offspring of his own. according to goldner, the sale of star wars "sith" toys to young children does not send the message that "sith" is a movie for them to see.

"We sell a tremendous variety of toys for 'star wars,' and we sell different toys for different ages as well as for collectors," Goldner said. "I don't think anyone expects those children to be at the movie on opening day. The toys are a way to participate too, for the kids that won't be at the theater."

is brian really this dumb? probably not. more likely he’s just a liar, and not a very good one at that. feigning innocence in the face of such a whoriffic and obvious untruth isn’t clever. but given his position and salary, we probably shouldn’t expect him to be truthful about the mega-bucks that are about to roll in.

goldner: "sure, this movie is totally inappropriate for young kids, but george lucas spent a ton of money getting it made. we’re gonna drive the hell out of demand, and kids are gonna drive their parents nuts until they get into the theater.”

goldner prior to his role at hasbro: 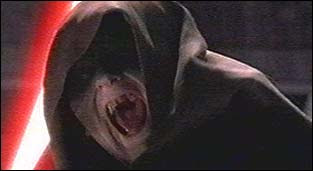