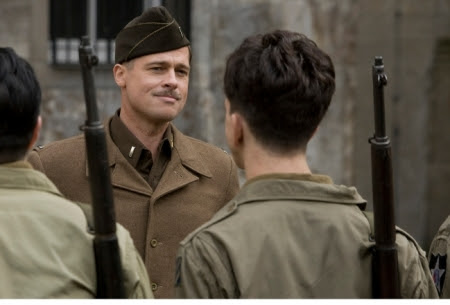 there are so many movies available through comcast on-demand, and i picked 'inglourious basterds'?

what's doubly vexing is that the word-of-mouth on this thing was so good. everyone i know was all, "OMG, that was so great! oscars for everyone!"

i mean, i get why so many people liked it. if you like your violence gratuitous and your philosophy morally untethered, it was probably a hoot.

but even as a simple revenge fantasy, 'basterds' fails. breaking news: hitler and the nazis were really, really bad. wouldn't it be high-larious if they all died horrifically at the hands of their aggrieved victims?

or, "the u.s. foreign policy during the bush years" if you will. and even if you won't.

another philosophical problem with this particular fantasy is that the victims' revenge came too late. to justify its rollicking good slaughter, the movie required that millions of people still die needlessly.

i mean, if you want to really torture hitler and his minions, wouldn't it be more fun to deprive them of their millions of victims? to stop their killing before it ever started? as long as we're playing "what if...", what if the basterds came across hitler in the early days of the third reich, discerned that things were heading down a demonic rathole, and killed der crazy furher on the spot?

the ethical trouble with that, obviously, is that at that point the epic crimes had yet to be committed. instead of preventing an historic catastrophe, the good guys would have been guilty of nothing more noble than pre-emptive murder (or "the bush doctrine" if you prefer. and even if you don't).

according to imdb, it took quentin tarantino ten years to come up with the script for this film. really, qt? ten years? for a premise that countless college freshmen have pondered for decades? nice work.

inglourious basterds grossed over $320 million in theaters, and now it's got five bucks from me. i don't begrudge tarantino his hundreds of millions for catering to moral tone-deafness. there'll always be an eager audience for that.

but i want my five bucks back.
Posted by spaceneedl at 6:21 PM

I feel that it is the big actors that are the pull to see many movies. Not just the story line, but I felt it was just another war show..I have seen better. Not totally impressed either.

jackie, you're right about the cast, and "star vehicles" in general. basterds cost $70 million to make, so i suppose the impulse is to pull out the stops and make something too big to fail.

on an unrelated note, i visited your site and read your blog. nice work, all around. you're good.