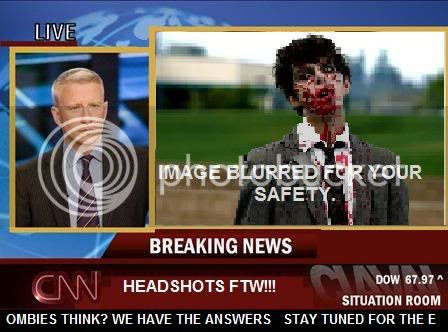 not at all! it's merely alive in a different form: newszombie! the cool thing about this news is, it eats your brains!

don't take my word for it!

"kill the killer whale?" soul-searchingly asks, "should we kill the intelligent animals we hold captive for our entertainment and profit?"

"seaworld suspending all of its killer whale shows today after after one of the park's star attractions turned on its trainer and killed her in front of a horrified audience...hln news shows are asking viewers if the whale involved in wednesday's incident should be put down."

did you feel it? part of your brain was just consumed! you'll never get it back again!

"what caused killer whale to attack?" wants you to believe that a bloodthirsty animal viciously turned on its trainer.

"Trainer Dawn Brancheau understood the power of SeaWorld's biggest killer whale better than most. She worked with Tilikum for more than 10 years. Yet on Wednesday, as she stood knee deep in water rubbing the massive animal's head as a reward for a good training session, he turned on her."

chompchompchomp...no, that's not the whale having a snack, that's newszombie eating more of your brain!

"gatorade dumps tiger woods" is a lurid tale of a major brand cynically used by another major brand, then callously tossed aside.

"We no longer see a role for Tiger in our marketing efforts and have ended our relationship," a Gatorade spokesman said Friday in a statement. "We wish him all the best."

on an encouraging final note, congressional republicans have finally come up with a substantive proposal for healthcare reform. let's roll the newszombie video on this plan...

are you clear on the plan? "let's start over, from a clean sheet of paper, scrap the bill, go step by step, and start over."

it was not widely reported, but the plan also calls for zombies to eat the brains of anyone with pre-existing conditions, anyone who gets sick, and anyone not covered by dick cheney's health plan.