hot fun in the summertime 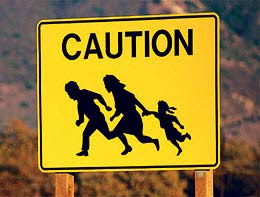 we're going to a wedding next month.

the bad news is, it's in arizona.

i hope no one asks to see our papers.

i mean, what if the local constabulary thinks we look like illegal immigrants?

"yes, we read them. which ones do you mean?"

"you're about to experience an arizona saguaro a whole new way, boy. now show me your papers."

"yes, well, see we're not actually carrying any papers. unless you count this copy of the u.s. constitution. perhaps you've heard of it?"

that's not a conversation that would end well for us.

mrs. spaceneedl grew up in arizona. i lived there for three and a half years.

cosmically speaking, we got out just in time. just ahead of the collapse of the rule of law. the principle that says you can only be accosted by law enforcement if there's a reasonable suspicion that you've committed a crime.

a standard slightly above, "you look suspicious, bitch."

the premise that an illegal immigrant just has "a look" about them is a little nebulous, legally. as a source of illegal immigrants, given arizona's proximity to mexico, one might reasonably conclude that most of the offenders would look mexican.

therein lies a problem: in arizona many people look like they might be of latino, hispanic, or other spanish-esque descent. they account for up to a third of the state's population.

will arizona's already-stretched police departments stop and harrass all of them? if not, why not? aside from the fact that state's new "you all look alike to us" law is unenforceable, of course. put another way, if even the anti-immigration loon tom tancredo thinks this measure goes too far, you should conclude it's way, way out there. really.

as an aside, dollar for dollar, no one commits more crime than white folks. the people who threw the global economy into meltdown and liquidated trillions of dollars? overwhelmingly, they were zanetti-suited white boys. why aren't we profiling their ilk? better still, why aren't we putting them to work doing dishes, laying sod and pouring searing-hot tar on the neighbor's roof?

perhaps arizona doesn't have an illegal immigrant problem. maybe, and i'm just speculating wildly here, arizona (like the rest of the country) has an illegal employer problem. maybe if employers weren't falling over themselves to hire cheap (and desperate) labor, those laborers would stop risking their lives to come here.

but then employers would have to hire americans, and as everyone knows, americans are lazy and don't want to work. so that's out.

arizona's official unemployment rate in march was 9.4% (which means its actual unemployment rate is significantly higher). that's a lot of people who don't want to work. coincidently, houses in the state's major metropolitan areas are so far underwater it may be years before they see sunlight again.

all of which implies that arizona has a lot of problems that have nothing whatsoever to do with illegal immigrants. and yet somehow the state government thought this was an ideal time to make themselves a laughingstock. and to help tourists decide other states might be better destinations for tourism dollars.

it's early yet. the wedding isn't until the end of may. it's possible cooler heads will prevail, and arizonans will decide their new law isn't such a good idea.

if not, we'll still have time to complete crash courses in "anti-constitutional rhetoric for dummies" and "how not to look all illegal-immigranty in arizona".
Posted by spaceneedl at 7:17 PM

Mike, that was excellent. Muy bien. I laughed out loud. Have fun at the wedding.